Scorchio! Talking to an Irish couple from Letterkenny-duly added to my list of places to go to-after the distillery tour, they reckoned the last time Ireland had several sunny days in a row-or “summer”, if you like-was 1995. But that’s what we have now, and teenagers with no experience of it are not the only ones looking around in wonder.

I was up earlyish, thinking of leaving to see sights but decided on a bike ride to wash out the tiredness from last night’s race. After a puncture repair, a quick hour, with 20 minutes down to the beach and 40 back (not so good at the up, it seems) left me feeling fit rather than creaky. I headed for Bushmills distillery, with an interesting tour-the smells are the best bit, and a dram of Black Bush afterwards. From there it’s a short hop up the coast to the Giant’s Causeway. Stunning scenery, though if you’ve driven up the coastal road already then you’re well used to that by the time you get there. I thought the Atlantic looked a much deeper blue than the Irish Sea. It used to be that you parked in a council run car park for £7 and wandered on your own. That may still be there, but the National Trust visitors centre is there and allows parking and entry for £8.50. Worth noting, though, that passing through the visitors’ centre and picking up an audio guide is optional, though that fact is not widely advertised, so best to park there, have one person pay and meet the others the other side. Perhaps exploring first to find the way. Better, though, than adding to the story from the paper that ‘parking’ for a group of 5 costs £42.50.

After the Causeway I headed along the coast, tucked in behind some slow moving traffic, finding beaches and greenery everywhere. Such a stunning country, but it doesn’t half benefit from some sun. Everything seems made for it-golden beaches are wasted on a rainy day. Go on then, one more night in the camping barn. 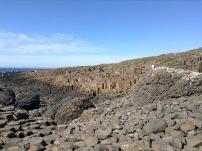 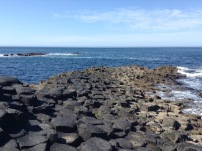 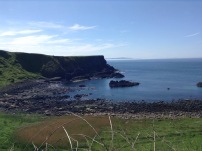