There are three Aran islands, small medium and large, and I’d decided to head for the largest, Inishmore, so as to get a little more cycling in. Or, at least, to be somewhere with a loop rather than the series of cul de sacs of the smallest island. Middle island is deserted, and the ferry companies only sail there occasionally, it seems. Of you’re thinking of going, you’ll get 10%25 off online, but head down to the pier and look clueless/interested and the ferry companies will swoop. Perhaps there was a time when just one company operated, but now there are three and within 5 minutes chris had given me the low down on the islands and promised me the Internet fare on production of the leaflet. I went to head off, satisfied, but Bill next door invited me in, gave me the low down on the islands and promised the same fares. Somehow my brief silence reminded him I’d been next door and he chopped off two euro immediately. I booked, no heart for the serious haggle, but if you enjoy it this may be the place for you. 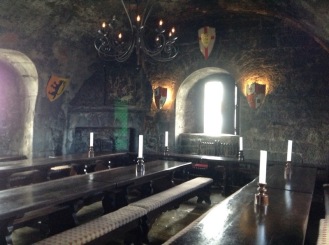 The crossing was bumpy to start with and takes over an hour-from Rossveal it’s quicker. Once there you can be on your way quickly, and a bike in your hand is repellent to the tour and bike rental offerers, so I was off round the island. It’s a time team delight, a series of low stone walls to be seen in every direction. The highlight, apart from spotting butterflies and birds every time you pause, is the ancient stone fort, abandoned in the tenth century. It draws crowds but is a reasonable 3 euro to go in. It’s enough of a hike from the visitors’ centre that on my way down I spotted 3/4 of a family laughing while their daughter stopped in partly-mock disgust at the length of the walk ahead. Those less sure of foot struggle, too, as the path steepens at the top, so any willingness to become a human bannister finds plenty of takers.

The fort is three sided, with the cliff edge the fourth. Not a place for small children without reins-the edge is sheer and unprotected. Plenty of Americans up there when I went, from the yompers taking it in their stride to those ironically commenting on the staggering age of the place – “well my flat’s, like, 50 years old, so I know a bit about age”. It’s a view and a half, and I could feel the vertigo in the soles of my feet as the braver went to the edge, lying down to peer over.

They really say that, it’s not just from Pretty Woman. The way back down (via path) has a view of The Worm Hole, a natural rectangular shaped pool into which the sea rushes, sloshing dramatically against the edges.

Heading round turned into as much walk as cycle, as the road bike wasn’t really up to the rocky unkempt ‘road’, but I had an even better view of the rocks and small stone walls ads result, before cycling round to the small harbour town and along to the eastern edge of the island, which holds playing fields, the airfield and, round the corner, a beautiful and deserted beach. I used it for some core exercises, as you do.

Back in town I slipped past the Aran sweater shops and bars in favour of ice cream and coke from the Spar. It’s a nice Spar, mind, plenty of space to sit outside in the sun. Finally, to he ferry, delayed by being busy, and back to the car in hope that it has enough petrol to make it to a station. 464 miles on this tank is pushing it. Once I’ve got petrol, preferably without having to cycle and fill a bottle, it’s Ennis for me. Looking up a running club there is entertaining, thanks to Jessica.

Ferry sailings for a day at inishmore go out at 10, back at 4 (maybe 5, if your company is having a busy day). As it turned out, The O’Brien line’s “we’re busy, we might be coming back at 5” turned into a 6pm exit from the island, getting us into Doolin after 7, but no one seemed to mind too much, mostly laughing at the fact that we were watching the port wall for signs of a mast coming in. I’d stupidly not filled the car with petrol in Ennis then found the Ennistimon service station closed the night before so was as empty as an empty thing, but it turned out that the ‘couple of pumps outside a shop’ was a real petrol station so my worry that the journey back to Ennis would involve a bike ride and return with a can of petrol was unfounded.