It is, just that. Just like Friday, when I sunbathed for 30 minutes, went inside to sleep and woke to grey skies and rain. Changeable didn’t really know what it meant till the word came to Ireland.

One of the best things about staying in a hostel is wandering into your room and automatically having a conversation with a roommate you’ve never met before, and that’s exactly what happened last night, a Canadian girl rolling cigarettes on the floor-making roll ups, rather than racing cigarettes for fun-chatted happily about Ireland and their-I spotted her friend on the top bunk when she joined in-plans for England the next day. They were going to all the great spots, flying in to Liverpool, then Chester, London, Grimsby.

Right. At any rate, they went out for their cigarette and that was nearly the last time I saw them until I removed my hands from the cigarette rollers neck. Some time in the morning, off goes her alarm. She silences it. Half an hour, perhaps, later, off it goes again, waking me before her though she eventually silences it again. Each time I assumed this would be the last time but no, at least twice more it went off, she just liked the snoozing. How cute. IN YOUR OWN ROOM. An 8 person dorm, not so much, you selfish *****.

Ahem. I got up around 10 and eventually got out for a run. Eschewing yesterday’s paths, nice though they’d be for a run, and headed down to the main park entrance, which turns out to be a nice warm-up-2-miles away. As you can imagine, running through the trails in a national park is awful, nothing to redeem it, not the greenery, the shy mountains peeling through the gaps, nor the thrill I always feel yomping past walkers kitted out in full goretex, with their day pack and some with poles, while I got ready in 5 minutes, no breakfast, covering 14 miles in under two hours and wearing a T-shirt and shorts. Shit, as I say. I was so distracted by the crappy scenery I even forgot to frown (much) at the dad taking his family of small children through two sets of ‘no entry to bikes’ signs on their bikes. It’s a one way road so the pony traps and occasional car can go through. Not the most dangerous spot, but still odd behaviour to file under “not sticking it to the man, but to your fellow man (you dick)”.

Most people have moved on from the hostel but I’ve still two nice roommates who are sleeping away Sunday and allowing me to feel virtuous in my exercise and justified in having my feet up in front of the telly. They even have sports channels, I might see the cricket if it starts. 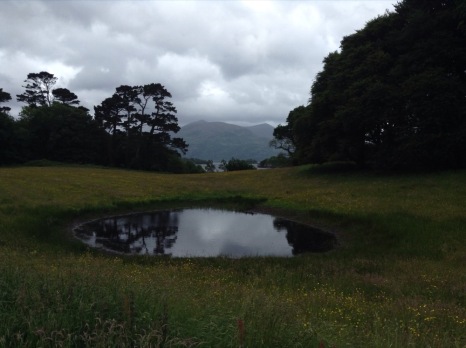 Me, in front of a painting of a castle.