A hot day dawned. I was up early, but not too early. It was only when Katherine was talking about fitting-breakfast – in worries before athletics that I realised why I had it in mind that we’d have a very early start. When I looked at the timetable I was in Britain, and it gave British timings; but since then, Brussels, Helsinki and St Petersburg have all stolen an hour. 6:xx starts become 9:xx, much more acceptable.

Despite having a borrowed metro pass in my pocket I decided to walk this morning. It looked possible, it might set me up for a run a similar way and I might get breakfast on the way. Other than picking up a small blister, 1 and 3 worked out fine, and 2 will look after itself if I can find time. Going to have to make an early start tomorrow.

Maybe. Walking in I was on the wrong side of the stadium, so I headed in the right direction and found the warm up area in my way. No barrier, and I spotted plenty of athletes out first thing, including a posse of Chinese race walkers banging out laps. Interestingly (shush) the race walking course is now much shorter than it used to be and they do laps. They used to have a course like a marathon one, but it was too bad for credibility, plus people would only get red carded when near the stadium, soul destroying. Now there isn’t the same feeling of ‘but I wonder how many infractions happened away from judges’. As I left a couple of the US team passed by, turning out to be half their decathletes, Taiwo and Nixon. The latter is a junior but was the star of the day, pb in the shot and long jump, plus went highest in the high jump to end in second place, only denied first by Olympic champion Eaton performing, finally, to expectations in the 400, a couple of seconds (or 100 pts) better than anyone else.

Later on, pre marathon, I went for a wander and the warm up area was nearly empty. Other than one tall Jamaican with his cans on, jogging languidly. Too far away for it to be as cool as wandering past David Oliver yesterday as he waited in line at the hotel.

The marathon was superb, as Rob would say, led from the start by the Italian 36 year old who accelerated at 30k, couldn’t lose Kipketer but did for everyone else and celebrated her silver quite rightly. Shame she couldn’t win it, but her tactics worked in getting her a medal. She burned off the other African runners, too, so the heat favoured East Asians and great to see a Japanese picking up bronze.

The decathlon was enthralling, the throws diverting – especially the French ‘Bigot’ attempting to qualify in the hammer, the long jump qualification dramatic – defending champion tied for 12th-and-last qualification spot, going through because her second best jump was better, having jumped the same distance twice. So to Mo. Lots of talk about how the big groups of Ethiopians and Kenyans might try to take the big last lap out of his legs, and whether it was possible to take it out fast enough that he wouldn’t be able to use his kick. As for Mo, who knows what he might do, ostensibly on his own with no teammates to help, but with training partner Rupp in the field. A huge field, too, and as Mo slipped right to the back from the outset it looked a big gap to the front, and I wondered how he would spot it if someone did take the pace on. The Kenyans and Ethiopians spent a few laps sorting themselves out but were all up the front, with an Eritrean the only other. After a mile or so Mo reassured nervous watchers that he was there, moving to the front seemingly just to say hello before immediately slipping back to the middle of the 25 or so strong field. There he stayed, Rupp just ahead and it was noticeable that they were tracking the front group while Mo was allowing Rupp an extra 50cm or so of space – no worrying about footfall, where those up ahead were more bunched. A couple of times Mo moved nearer the front, seeing or feeling a change in pace, but again settled back before taking the lead a couple of times and immediately slowing it slightly. He hit the front with intent with 2k to go, and this time whenever anyone drew level he went with them, forcing them to run wider. 1200 to go, and really it’s playing to his last lap strengths, though the other US runner took the lead with 1k to go, before being swallowed by the pack. At the bell Mo was where he wanted to be, with Jeilen and Tanui chasing. Full gurn territory, but he was equal to everything they had, crossing first with arms spread. 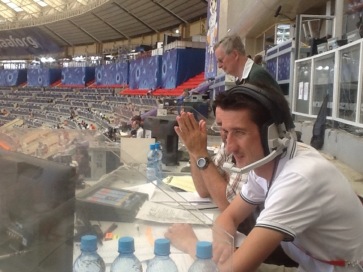 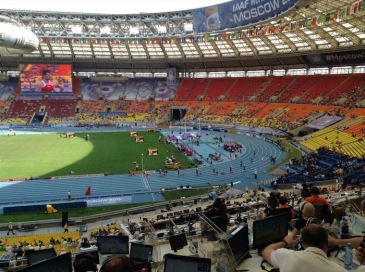 Brilliant. Still Usain Bolt to come, and he casually took first in the final heat of the day, with semis tomorrow. Finally we had the opening ceremony (!) which looked pretty enough, and I headed back. More of the same-but-different tomorrow.