Flash interviews are conducted with athletes on their way out. Linda Stahl, having qualified in the javelin, talked about training whilst working as an assistant doctor, and is apparently “here on a leaf” which is their version of ‘on a wing and a prayer’ though she qualified comfortably enough. Highlight of the morning for me was the final 200m heat. Usain Bolt eased through, not needing a great time to win, looked right and spotted no one, looked left and saw Delanno Williams racing up, just as williams eased off and grinned back. The two finished the race grinning, pretty much laughing, with each other, as if it was their own private fiefdom, no one else involved. Good to see some British talent happy to mix it up, as did Chris O’hare in the 1500 earlier in the week, taking it on with over a lap to go, and responding whenever anyone came alongside until the final straight. He couldn’t hold it then, but qualifying on time was the least he deserved for a gutsy run. 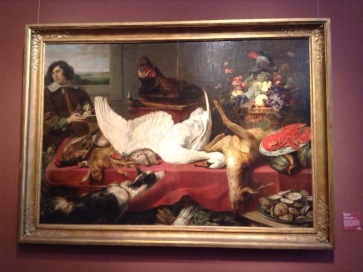 Could you not have cooked it?

6 Hours! Do you want any fucking fruit or not?

After a short session, I headed to the Pushkin museum. An easy ride on the metro, 5 stops from the stadium, it’s easy enough to find if not immediately obvious which beautiful building holds the museum. The queue outside looked bad, but moved quickly if sporadically. 400rub entry. They’ve gone large on the pre-raphaelites (finally, use of the word ‘pre’ without my having to shout ‘******’. Pre-booking, I ask you) upstairs, the section a bit crowded for my liking. There are a succession of masterpieces, and not too much ‘ah, another madonna and child’ religious nuttiness. Having forgotten my guidebook, though, I was a little confused at first-statue of David? Bust of Pericles? Not much in English amongst all that, but one crucial word is; plastercast. Apparently they were intended as models for students. Certainly grand, but it does make it all a bit fake, and means the few real marble heads and the like don’t stand out. The large pieces, including wall friezes, are impressive, though. Amongst the pictures, the portraits without provenance always seem a little too prosaic; ‘Portrait of a man’ ‘…a woman’ ‘…a man with whiskers’. Some fabulous art, and a Titian display there at the moment, though I’m sure they rotate them regularly. Don’t be fooled that the downstairs area you can see at the back of the building, under the main stairs, holds another exhibition area; it’s just cafe, toilets and exit. You can come back in with your ticket if you wander down there exploring, mind. The building itself is grand, enormous high ceilings, decorated in a variety of ways, from large skylights to plaster sculpture and paintings. The whole thing is probably just a plaster cast of an original somewhere, though.

A great evening of athletics. Fraser-Pryce scorched through again, Ahoure just hanging on to silver, while Gemili raced through for another pb, two in the day, taking another .19 off (.13 earlier) and going under 20 seconds for the first time, 19:98. Chris O’Hare looks a right racer, prepared to get in and have a go and qualified, having given the 5inches taller Frenchman a heck of a shove, in an admittedly slow race. Mo, once again, took the lead 600m out and repelled all attacks. On the replay you can see the point where he attacks, with Gebrhimet immediately responding, but that passivity hasn’t worked yet-once Mo gains that yard with a lap and a half to go, he holds on even when he works hard. One Kenyan made a move early on, and when he was joined by the other on the next lap it looked like finally Farah would be challenged by a quick early pace, but Farah left them to it and it soon closed up, with splits (if I remember rightly) of 2:45, 48, 49 before they sped up towards the end. Britain were squeezed into fourth in the 4x400m, Russians won the long jump and hammer to huge noise, the latter with a championship record. Rutherford’s form from last year would have got him a medal, but not gold. I moved away from the commentary area so I could make some noise, though went back for the medal ceremonies to avoid all the standing up. A brilliant night.