I was right, dammit! We lost more time, in fact, ending up something like 4 hours late, though juggling time zones to work it out sometimes confused me. The trick is to just work in Moscow time, as the timetable does. But then technology distracted me with Seattle, London, Tokyo and Khabarovsk times.

I saw it as bonus time on the train, or at least did while not fending off small person attentions. The girl from the next door compartment was having more fun with the iPad, so Radmilla decided that jumping on me would be excellent, and took a while to spot that I wasn’t playing along any more. I still polished off a book and a half and window spotted. Plenty more birch forests, a few settlements with wooden houses and then, at last, around 5 in the afternoon, Khabarovsk. It was raining there, heavily once I made it into the station and must have been doing for a while. The fields around the main road and railway are flooded, and when I went for a wander and, later, a run, I found the roads by the river were waterlogged. There were sandbags to protect businesses, though I think they had been put down after the water and then they’d pumped out the water, rather than stopping it before it got there.

I was hungry, so hit the supermarket, superbly positioned just over the road from the hostel. Directions to the Corona hostel are sparse – look for the biggest buildings in town, with a crown on. Right – ‘head for them’ is implicit, I guess. It is easy enough to find so long as you go with the flow and the spirit of those ‘directions’. “As you emerge”, for instance, means “…from the train station”. Those from the airport can sort themselves out. 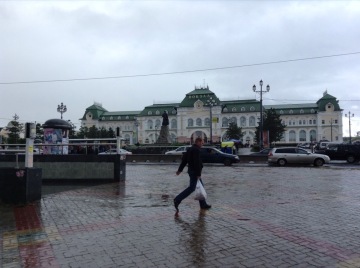