Lounging about in my top bunk after last night’s chat fest, I realised I had made all sorts of tentative plans for October and November, but nothing for today. Running round Ueno park had reminded me that the museums are there, and I’m only round the corner from them. Funny how things work out; when I stayed in my first Japanese hostel, Tocumaiso, I’d wondered whether I should run round the park but opted for the river, an area I have sat in at night several times, enjoying the warmth and watching the runners. But here I am near Ueno again, so I opted for Tokyo National Museum.

The museum is huge. Cost is just ¥600, and then there are 3-4 (two are linked) big buildings to explore. They give the exhibits plenty of space to breathe, and the place has national finds from as far back as 10-6000bc, to give an idea of how life changed. The warrior era is incongruously represented by the tea sets; those with the best china had the best status, and it was a mark of a levelling playing field when more common folk had tea sets. That said, once you’ve been round one building you end up revising what you’ve seen, so once you have seen the Japanese swords in the main building, for instance, you can appreciate those on the second floor in some sort of context. They’ve done a good job of having similar exhibits around different themes.

I had run earlier in the day. But not early, just before midday, and it was roasting; officially a high of 30 or so, but I’m sure it was warmer. Frankly, I struggled, and after 7 miles didn’t need to wonder where the hostel was. I’m sure I asked the GPS to take me back to Toco, but it got excited by proximity and took me to the nearer Tocomaiso instead. I knew the distance it was telling me to home was too short, but allowed hope to get the better of me. Still, made it, but then under ate, such that it was a tired and dehydrated trip round the museum, then an indecisive visit to Ueno looking for food. A section of the park is marked on the map by a big lake, and so it is, but one filled, absolutely filled, with plants. People do tend to stop and take in the scenery, perhaps as a corrective to the busy streets. 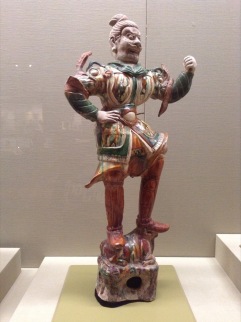 Time to get funky. 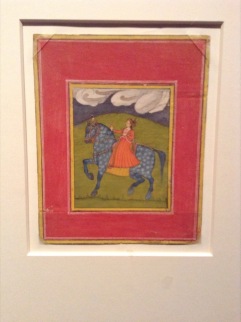 My final stop, screeched in with 15 minutes before closing time. Was it worth it? Hey were less miniature than I’d thought, though I will at least not wonder now.

I had a quiet evening with dinner at bar 369-pick a small diner at random and the food has always been excellent so far-and a beer in the garden. The garden here is beautiful, fish swimming in the pond, and a mini mountain of rocks. Apparently “the old people” carried the rocks from Mt Fuji so they wouldn’t have to trek all the way there. A case of the mountain being moved by Mohammed, trust people to find a third way. I think the meaning is more that our ancestors did the labour than that they roped in the local geriatrics and set them going with the promise of a cup of tea and perhaps a biscuit if they carried an extra rock, but who knows?

Last night the room was busy late. Tonight everyone seemed to have checked out in favour of people who were out till after I’d fallen asleep and gone before I woke up. Cheers, whoever you were.