I’ve not stayed in a duff hostel in Tokyo, and I’ve moved around a lot, staying in five here and one in Nikko. But Toco Tokyo Heritage hostel still stands out. Khaosan annex is cheap, with a good common room and plenty of space for stuff. Near the river, I’d have been happy to stay there throughout, but had to move, to Toukaisou on the other side of the river. This was more traditional, with a lovely common room and a roof terrace for the smokers. Being more centrally located I decided that maybe here was a place to stay for longer despite being 25% more expensive. But when I came back from Nikko I was back at Khaosan, this time round the corner at their ‘smile’ building. Another bargain, and this time I lounged on their roof terrace while my washing dried. Only two days available there, and I moved to Toco.

The front room doubles as a living room and bar, with locals joining us from 7 onwards. The hostel itself is an old building out the back, Japanese style with paper thin walls, glorious. But the staff. Welcoming at the start, and they made the effort to remember my name. I was one of only 4-5 westerners there, and it seemed like that was typical – many more at Khaosan, with the others more Japanese, perhaps with the exception of Toukaisou. Perhaps just luck. Whenever I went for a run the staff at Toco were impressed, more or less cheering me in yesterday. Ryoko took the time to introduce me to her friends and generally was a sweetie, but the others would go out of their way to say hello, and as I sat in the kitchen updating the blog last night I was urged into the living room. Then this morning I was leaving, sat around for a while in the joint area, and they insisted on a photo. A Korea guest got us to make ‘tears’ out of tissue for a comedic photo and then I left. Ryoko and her illustrator friend – Yuki? – waved me off so energetically that the old man across the street joined in! Way to feel like a VIP. I turned halfway down the street and they were all still waving, and as I reached the end… yes, still all three waving me off. 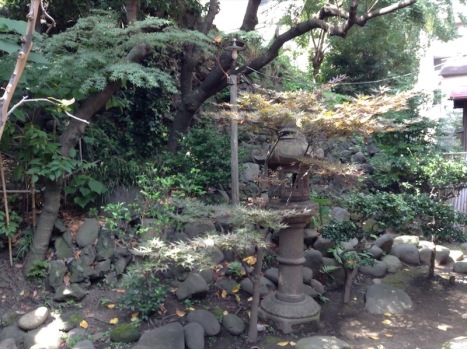 That has to be a highlight. I spent the rest of the day moving stuff to Retrometro backpackers, which is small and lovely again, then lazed in Ueno park. Way over 30degrees again – still 31 at 5, without sun – but entering the park it was noticeably cooler so I stayed. I thought yesterday when I saw the “relay for life” arch in the park, with gazebos behind it in a square, that I was missing a race, but today as the event was going it was obvious that this was a walking relay, almost certainly a charity one in aid of cancer research. With some bands in the middle to keep people motivated; the lady doing Whitney sounded like she’d belt it out but couldn’t quite hit the sustained notes. It was only Whitney Houston music, mind. Lunch was a decent fill in a local restaurant, nice and early to avoid a repetition of yesterday. Learning as I go. 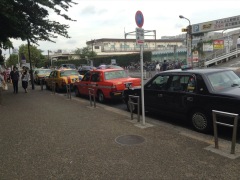