That’s the name of my pub. I’m not sure where it’ll be opened, even to which country it’s most suited, but it will be magnificent, the ice sculptures legendary. I had a feverish night and woke up feeling better, if not fixed. I took some time to do my admin – which in the absence of anything harder to deal with means toenails and washing – and made my way to the South bank park area for mid afternoon.

Sat minding my own business I was content, interrupted only by a drunk Irishman checking everyone was alright – quietly, mind, no rampage. A flurry of activity on my left made me sit up, and there were (Australian cricketers) Johnson, Warner and Lehmann. I figured it for a charity shoot, realising belatedly that the sand sculpture I’d written off as arty was actually a large moustache – November is grow a moustache for the same charity every year month. 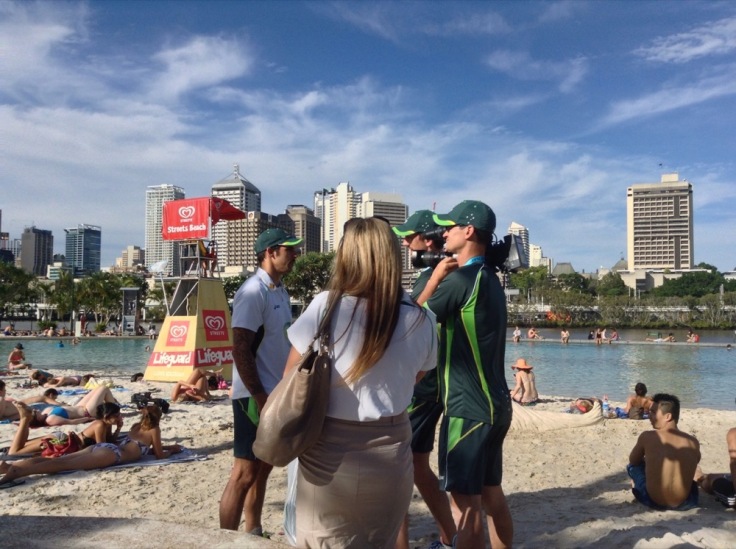 Interest was… muted. I’m far from having a representative sample, but people are not overly optimistic about their team’s chances. Thinking about it, though, no one has said England are good, just that Australia are “**** now, mate”. Warne and McGrath are a recent enough phenomenon that memories take precedence over rating the current team. Although, equally, the problem “isn’t the bowlers, mate”. Back at the beach, it was great to see the respect given to the trio, no one interfering beyond the occasional handshake and ‘good luck’, but with only 1s of people making their way over to take a picture, it would be fair to say the beach wasn’t stirred beyond a factor of 1.