Say what you like about getting to a place early, and it is a pain to be up in the middle of the night (even if you are more sensible than me, and don’t attempt to sleep lying on the floor in a cool terminal), but arriving at 7am gives you the chance to walk miles in a new place, have a good couple of hours sleep in the middle of the day, explore a little more, run and still be in bed well before 10pm.

Heights are not my favourite. Wobbly bridges are not my favourite (wobble may be more in my imagination than anything else). But if I was to complete my journey, I either had to pay for another bus ticket, or walk over the Tasman bridge. Signs warn that it’s a high-wind area, and there’s a traffic light system for pedestrians as well as cars. All green today. No pictures from the middle of the bridge, though, because I was too nervy to get the phone out. I did turn and check for bikes several times, but have long-since practiced the ‘see without looking’ technique that let me turn, pointing my eyes through the railings and over the water, without taking anything in.

This sculpture marks the opening of the bridge by the Duke of Gloucester.

As brave as I got, I was still on the bridge here, but done with the main hump.

These cows were placid till photographed. Then they got up to leave.

I spotted a plaque when just a few minutes into walking over the bridge. Reading that it commemorated the Tasman bridge disaster, and those who lost their lives, did not help me much. Nor did the ‘are you in crisis?’ signs and telephones for the Samaritans-equivalent. Not that I wanted to jump, but I was aware that my facial expression, and inability to turn round without holding the railings, might all add up to an embarrassing ‘what the heck is that bloke doing? Let’s go help’ incident.

Nothing happened, and soon I was passing the botanical gardens. 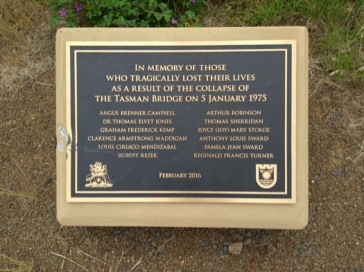 I never promised you a university rose garden. But here it is anyway.

After a sleep in the afternoon, which was deep and restful but didn’t clear my overwhelming tiredness (and the over-emotional thoughts and potential bad decision making that comes with it – there is, incidentally, no further story here; I just needed a good night’s sleep to recover and feel great about life again, and knew that, so mostly just ignored darker thoughts) I explored the waterfront a little. 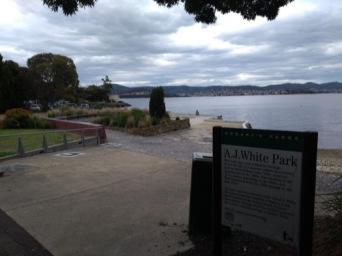 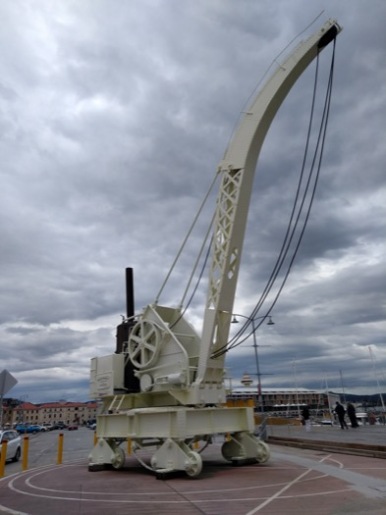 Dockside crane (or exhibit – it’s not in use any more). 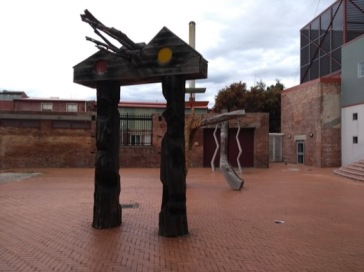 It is still incongruous to see a Christmas tree in sunshine, even if it wasn’t a boiling hot day.

In part because of the temperature (cool and slightly drizzly so far, known for being cooler than the rest of Australia), Tasmania so far feels more English than the mainland. That feeling is helped by coming across funny little clubs, like this one – lapidary. It may be thriving, but was very quiet as I walked past.

You may also get the idea from that photo that there are hills. I ran in the evening, up and down hills, ending up on the beach at Sandy bay, with sun poking through after a drizzly start.