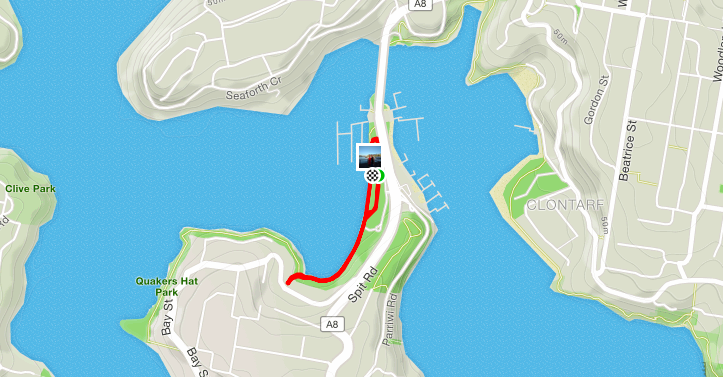 When I arrived, my host Justin suggested we’d head to Curl Curl parkrun on Saturday. That’s a lovely, flat and fast, parkrun – and I know that, because I’ve done it before. I had mixed feelings – I like to repeat parkruns sometimes, because it makes the touring less obsessive. Equally, I like to go to new ones because, well, they’re new, and that itself ticks many boxes.

Later in the week, perhaps remembering my previous “Wahey! New parkrun!” posts, Justin suggested Mosman, which was not much further away from home in Manly, and reliably has smaller fields. At the mo that usually means around 50 people, though our turn was a boosted field of 97. It’s pretty narrow in places, and would struggle to take too many more if they weren’t spread out.

It is in part a looped course, starting on the grass, heading South, down towards the bottom left of the map above, where the course’s elevation sits. Only 24m on the whole course, but 8m (give or take) of that comes in the short, sharp, hill at that turnaround. A hill that starts attackable and ends survivable. And you run it three times.

We got a photo before the start. The course looks over Sydney’s second-poshest suburb. A view over one’s boats from those houses; lovely.

After heading out on the grass and bashing up the hill, the course comes back on the track pictured.

And here is the proof of that. Just look how much sunnier it got just half an hour or so later. This was the day before the heatwave that took temperatures up to 40+, and a 7am start, but it was still pretty warm.

I was pleased with the run – slower than on some other courses, but it felt like a good 5k, and a tough one thanks to that hill. It really is the ‘scorpion sting’ I saw it described as, and makes a mostly flat course surprisingly tough.

On New Year’s Day I got onto Australia’s most events table. Browsing that table I was surprised to notice that the same was true of David Piper, a fellow UK tourist.

It turns out that he has also been to Australia before, and came back last year.

That made me all the gladder to have been taken to a new run, keeping in step with the Piper for a little longer.

Later I was at the SCG. England fans visited in hope more than expectation, and were rewarded with the day of Australian batting we had feared. Still, the SCG was a vision in pink to celebrate Pink Test day. It’s a magnificent thing – pink stumps and bails, police in pink caps, all the Milo kids at lunch in pink (rather than the usual mixture of pink, green and yellow outfits).