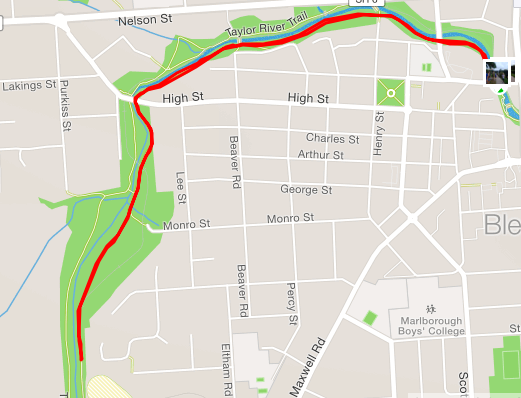 New Zealand’s courses are more of a mixed bunch of routes than Australia’s out-and-back dominated ones, but Blenheim would fit nicely into Australia, being a pure out and back. It’s scenic, for sure, running alongside the river, helped by a bright sunny day on this January Saturday.

It is also almost completely flat, and only the turn around is a sharp turn, the rest gently turns to follow the course of the river. It is also a fairly small event, with 49 runners when I did it, and 77 their record. All made for a perfect parkrun, runners spreading out along the course, out of the way of others using the park.

Beforehand, the run director took some photos from the bridge above the start, which should be featured photos on their underused Facebook page sometime soon. Then he gave the briefing, and joined in for the run itself, which made for a busy morning. It’s a friendly and inclusive event, as they all are, but smaller numbers makes it easier to socialise afterwards, and the scenic location is great for a warm up. I stayed at a hostel I picked at random – location didn’t matter because I was moving a car from Christchurch – but anywhere in Blenheim is only a maximum of a couple of kilometres from the start, so you won’t need a car.