My host recommended heading to Red Rocks, and I liked the idea of checking out the view from a famous (in the US?) amphitheatre, and seeing some of the park. Sadly, there is no really good way to get there on a bus, particularly from Northglenn. I figured I’d go for the walk, though, so got a bus to Denver, train to Federal Center station, then a bus out into Lakewood. Left in a suburban area, I turned and walked down a wide sidewalk – it being there was encouraging, at least – alongside a busy road and over a freeway. The Rockies in the distance and either side were inspiring, to offset the traffic noise. I did have to ignore a ‘sidewalk closed’ sign, though, as there wasn’t another option (other than backtracking) to get where I wanted to be.

Once I got over the freeway, things improved. I saw a sign for Dinosaur Ridge which I hadn’t noticed, despite it being clearly marked on my map. They have a (free to walk, pay for a driven tour) walkway, and that road leads to the Red Rocks park. From there, I went in via entrance one, and walked up the road. That bit wasn’t much fun, but I think they expect to see some walkers, as the side of the road is well marked for cyclists, and that serves to give cars notice of other traffic on the road. After a short while that felt longer after a blind corner, I took a trail off to my right, and was in amongst red rocks and clambering up to the amphitheatre.

The place is pretty dramatic. In the summer it gets pretty well used. The visitor’s centre – separate to the museum – lists who has played there each year, and while the earlier years are impressive, the last several years are absolutely packed with dates. But in the day, it is available to visitors, as well as people exercising on the steps. None of them had walked up from where I did, mind. I really feel a little punished in the US without a car – I mean, on a day like today, it was a decent walk in the sun, but I definitely feel like there are places I am not really meant, or at least able, to go. I also rebel against the idea of driving to go for a walk, or run, as a routine thing, mind, so am just turning against the US and its car-heavy culture here. I feel cut off if I need a car to get anywhere, even if I actually have a working car – it feels too precarious.

Still, it works, and the place had plenty of people in without feeling crushed.

After the walk, I wandered back down the trail, but followed the Red Rocks trail more closely. That took me out of Red Rocks exit 2, from where I could follow the Dakota Ridge trail back to the dinosaur trail. And from there, rather than turn and walk over the freeway, I walked along a wide but quiet road (S Rooney Road), to get to the Rooney Road trailhead. That might need some care if it has been wet, as the trails can be closed. Even on a dry day, admittedly after thunderstorms a couple of days before, it was on a middle level ‘use not advised’. Still, I could follow a longer but prettier route, through William F Hayden Green Mountain park, back to the bus stop at West Alameda parkway & West Jewell Avenue to retrace my steps, hopping on the 21 bus. Well worth it for the views. But with a car you could spend longer in the mountains. 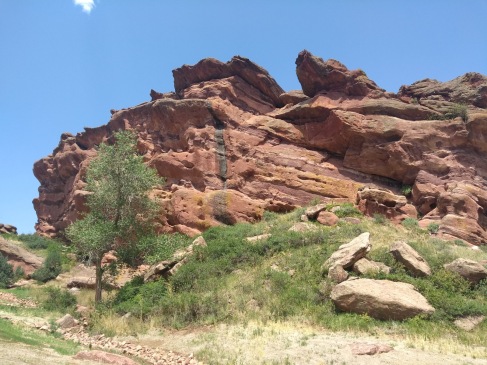 Red rocks – not part of the amphitheatre, which gets its acoustics from the massive slabs to the sides.

Green mountain, from the trails on the way back.