I am in Aspen because it has a parkrun. That is to say, I did not come here with other goals, though I knew there is a theatre and cinema, and expected beauty. I may not have expected quite so much beauty, thinking of this as a winter time place. And indeed, the bus driver returning us from our various activities at (greater) altitude this evening said “come back and see us reeeal soon. Preferably in Winter, when we know what we’re doing.” But it didn’t become quite so expensive (cheapest room in town, I’m in – dorm for $78 per night. Plus tax) without being fabulous year round, and summer is a delight. The town itself is chocolate box pretty, glamorous residences, easily navigated streets, and respectful drivers – even by American standards, where the general “defer to pedestrians” rule is a delight. If you mention that to an American, they’ll look confused, and say “well, we have rules”. But so does the UK – if you’re turning, pedestrians have priority, for instance – but few care. Here they do. Perhaps it is enforced more strictly.

On a recommendation from my host, I walked to the Highlands centre, which is a couple of miles from the St Moritz Lodge. I am staying at the latter, not using it as some spurious landmark (“…which is only 3 miles from everything else!”). My host had quoted the bus tour of the bells as being $30, so I approached the desk with some trepidation, fully expecting him to be right, having checked out the relative luxuriousness of the changing and rest rooms, downstairs and en route to everything else in the Highlands Centre (‘er’). But the bus shuttle, and included tour, is just $8 for the way up, and free on the way down. I was in, straight off, and enjoyed the commentary, as he pointed out avalanche chutes – avalanches are very common round here – and told us how good the Aspen tree is at surviving, being able to bend right over under pressure, without snapping. Aspen’s first hey day was as a silver town, with 1/6 of the world’s silver thought to have come from here. As a result, though, when the silver price crashed, so did the town, declining from 15,000 residents in the c.19th. But it has 6,500 now, and that number must be increased by tourists, perhaps year-round.

Rocky path, gradient to the side.

View from the scenic lake loop, just off the bus. 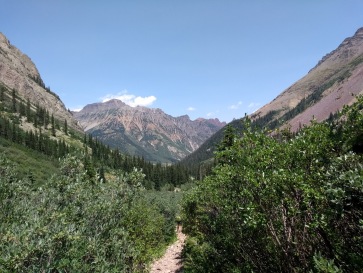 About four miles in to the West Maroon trail, past crater lake.

Panorama of trail, undergrowth and mountains.

Rocks, then trees, then mountains.

We disgorged from the bus, and everyone headed for the trail. The bus only takes 36 – more on the way down, when you are allowed to stand – but it still seems like a crowd as everyone heads off. But some room develops in time, particularly if you turn off the main ‘scenic lake loop trail’ to the West Maroon trail, which heads past crater lake. A different lake. There were plenty of people to pause for, passing the other way, or pass, early on, but it thinned out after a mile or two. I only walked four, but even that was a development, as I had thought about turning round after a couple of miles. This week, at least, the morning was the time to be on the trails, with drizzly rain every afternoon, though I couldn’t tell you if that was typical. It’s sensible anyway; with the last bus at 5, a late start might see you might easily get carried away and walk further than planned, then miss the bus and have to walk 14km or so back down to the centre. And it’s 2 miles to town if there are no more buses there. I started a little after 10, finished around 3.30pm, dodging a heavy shower through luck more than judgement, with about 3.5 hours of walking. Fabulous.

Plenty of wildlife around, too, though I didn’t see bear or moose. But chipmunks skittered, one pausing for photos and a little video. A marmot squeaked, a mountain goat walked away from the tourists, a strange (to me) clicking butterfly/insect clicked away down the trail ahead of me, while a large-eared rodent ran away off to one side. The sun popped out, more out than in, but it was noticeably cooler up here compared to town, which enjoyed 28 degrees. 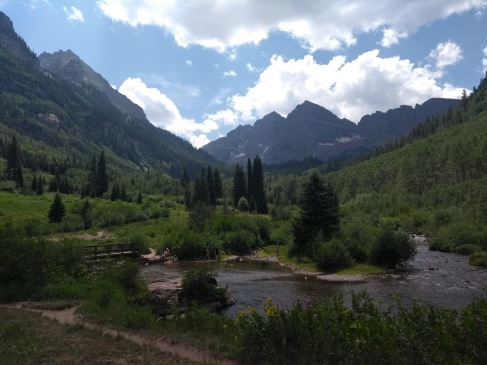 This is a babbling glacier stream. I forgot about it quickly, despite twice walking round a corner and consciously thinking “wow, the sound of the water disappears so quickly”

Crater lake, mountains behind and to the sides.

Scenic lake, from near the bus stop. A reading stop for me.

Scenic lake, from near the bus stop. Note the colours are different with changed focus – the two-coloured lake is as I saw it.

Fallen tree near the creek.

View of trees and mountains over Maroon creek.

One thought on “The Maroon bells and trails. When does a walk become a hike?”