I picked Salt Spring Island on a whim. Canada is, or seems, less expensive than the US, so I was looking to save money, and not to stay in the city, Victoria. Beyond that, I had few criteria, so spotting a cheap bunk bed option on AirBnB that would allow me to hop on a ferry and see somewhere new was a win. There is no sting in this tale – Salt Spring Island was everything I might have hoped for, and more.

The community is a farm, though they don’t seem to grow massive amounts of food. Enough to use themselves, perhaps, without selling great quantities, though there is a farm store out the front. Paying guests, staying for varying amounts of time, bring in cash, while others join for the community atmosphere, with meditation at least once a day, a sharing circle on a Monday evening, potluck dinner on a Sunday and other activities depending on who is there. Ju-jitsu on the Tuesday, for instance. 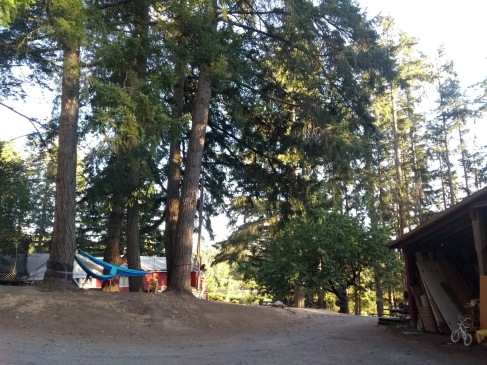 Hammocks in the yard.

Fulford harbour and the ferry.

View of the yard from the treeline. 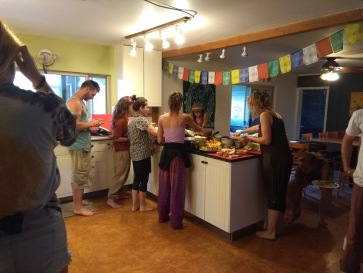 People are friendly and respectful, with the sharing circle there to allow for venting and self discovery. The potluck dinner is another excuse to talk to people, not that much is needed. Some of the longer-term residents – other than the owner, I met one who had been there for three years, working locally – take a while to warm up to newbies, as visitors wash through all the time, but none were unfriendly.

It’s also a great place from which to explore the island. Doing so is easier with transport; it’s not huge, so eminently cyclable, so long as you are not averse to some hill work. Hitch-hiking works, generally, so long as you can take rejection. And there are buses, though maybe not many per day. At least their sporadic nature helps the locals not see hitch-hikers as total freeloaders. I had to wait a little, but found it straightforward enough to get lifts to Ganges, the main town. Fulford, which has a couple of restaurants and a small grocery store, is 2.5km away, which makes for a decent walk. Particularly as it is downhill. And I ran to Ruckle park, chilled out by the water for an hour and ran back; it’s a great island to run round, hills and quiet roads with drivers well prepared to move over and give space to other road users. There are a number of short hiking trails, too, to give some variety. 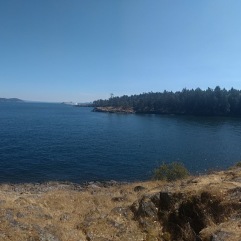 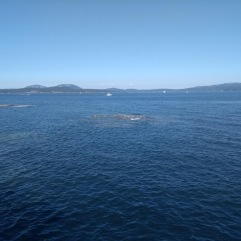 A rock. And the sea.

The island has 9 fresh water lakes, all of which you can swim, paddle, kayak and so on in. No motorised transport is allowed as they provide the drinking water, so each is a little oasis of calm. Less confident swimmers should take a friend, as at some there may be little infrastructure and the water is murky. I swam in Weston, which is lovely – there’s just one entry point, near to house no. 740. Usually there are a few cars there to mark the spot. And Cusheon is larger, and is a km or so walk from a junction. I mention it because that is a natural junction for drivers to drop you if you are heading for Stewart Road rather than the West of the island or Fulford. 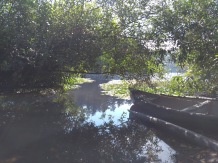 The entrance to Weston lake.

Cusheon lake, from the pier.

Cusheon lake at sunset, from the pier.

I made sure to join in with all the activities I could, had a fabulous time talking to people from around the world, and left only after hugging everyone in sight.