In to DC, out again on the red line, for me, to Grosvenor-Strathmore metro station and then, because I had time, a walk of a couple of kms to the start, past friendly people out walking with their kids, or exercising in the area. I had the choice of several parkruns which all involved trips of similar lengths – College Park and Anacostia were just as doable – but this, on a trail (which in the US usually means a concrete path, but hey, they decided to just use the words differently so that’s their problem) appealed to me for some reason.

That reason, if I’m honest, is that first place is often a bit slower here than elsewhere. Didn’t help me, I finished third. But that’s the honest reason. I was immediately glad I had headed this way, though, meeting Ron, a 70-something, much travelled – some military, some for marathons – and entirely new to parkrun. We chatted happily. And here he is.

The cone on the right in the photo is stuck in the middle of the path once you’re off and running. The course is a double out and back, so it’s 1.25km out, turn around a (different, unloved and unphotographed) cone, back to the start, round the cone with which you are now familiar, back up the course and then finish on the grass off to the right (as you run – on the left in the photo). The turnarounds alone are enough to add a few seconds to anyone’s time, though I am going to claim that I added extra by dancing round one of them, as below.

It isn’t the easiest course, undulating throughout and with one tough hill on the way out – though I confess it didn’t seem as tricky the second time round, when I wasn’t racing anyone at that point (more to the point – the first time out I was being outpaced up the hill by a bloke I had passed on the flat). The path is a great surface, tarmacced the whole way, but despite pacing a little better than last week, I still couldn’t quite get under 20. It’s a lovely run, though, with lots of support (“Go runner!”) from other parkrunners.

I thoroughly enjoyed it. The sun wasn’t out, and last night’s extended thunderstorms had taken the edge off the weather, but it was still humid (if you’ve not been to DC in August/September, be warned; it is fierce). A first for me on this trip – cool weather, with sweaty running. Another thoroughly recommended parkrun, just don’t expect your fastest time.

Turning in to the finish. 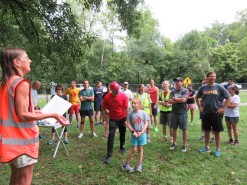 Pre-run briefing, from Cindy – herself an accomplished runner.