If you’re looking for a short version, many would sum this post up as: it’s fiddly to use public transport to get to Saint-Paulin. Hire a car – use turo.com to rent from a local if you want to keep the cost down – and then you can visit all the sights you want.

Still, I did not do that. The trains do not go every day, let alone multiple times per day. I ended up on an early train from Montreal (8:15 on Friday), coming back on a late-afternoon train (18:06) from Charette. Journey time is about 2 hours, though bank on the trains being a little late – 30 mins on the way out, for me. Smaller stops are requests, though you don’t have to manage that yourself; in North American fashion, each carriage has a conductor, here checking tickets, looking after refreshments and talking to train/track control about stops.

I didn’t contact the event team at Saint-Paulin, so it’s possible you could do so and stay with someone there, but in my research, the cheapest accommodation was at Gite la Voisine, near Charette. They have four rooms in a variety of configurations, and offer a single person discount; B&B at $76.10 (CAD) for one, $96.25 (CAD) for two people. Not bad at all. There is a campsite near to Saint-Elie, which is a little too far away for me to run (15km or so), but wouldn’t be a bad drive at all, and you’d probably save enough to cover the car hire.

I chose to jog to the start, which is a little over 5km – don’t be fooled if Google maps loses the plot and starts telling you it is 8km, as it did me the night before. You’ll run along a road, but it has a wide verge and is fine. My host offered a lift, and I’m sure she’d do the same for you if required. As a bonus, she had already heard of parkrun, so I didn’t have to explain too much – I hope they take in many more tourists, and are among many who feel the benefit of having the run in town.

The run is easy to find, as it starts right by the multi-use sports centre. That said, if you are there around 8:30, you may see the event team round the back of the centre, sorting the gear out. Don’t be disconcerted if, arriving a few minutes later, or being distracted for a moment, you then spot the event team get in their car and drive off – they are just coning off the turns, and will be back. Arriving at 8:50 will see everything in place.

As for the run itself, it’s a 3-lapper, and each lap is an out-and-back horseshoe. It is on very quiet roads, which are coned off for the run. The day I did it, the volunteer team was mum and two kids, who were charming. The youngest, covering scanning and tokens, ran off to join a group of women who were walk/running as they finished and started each lap.

Post-run view (but only if you head back towards Charette).

Attendance was quiet for me, just 11 people finishing, though they have another group who come along every week to walk just a couple of laps, happy doing their own thing without registration, scanning, emails and the like. It is a lovely community event. 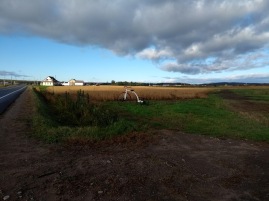 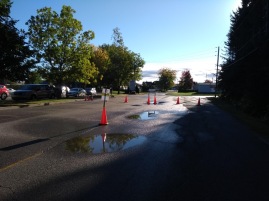 Post-run view (but only if you head back towards Charette).

Afterwards we chatted, a runner gave me some tomatoes from his garden, while another told me all about the huskies he breeds, trains and races – up to 400km – which was fascinating. Just the two of us had retired to the local cafe, round the corner from the run, which is brand new in 2018 (previously a flooring shop) and has delicious bubble tea and great-looking cakes.

All parkruns are great, but it’s always a privilege to get a view of the community that underpins one, and that is particularly easy in a relatively isolated and small, in number, one like this. As a result, I’d recommend this one particularly highly.