Riga’s old town is small and eminently walkable; both these museums are within a 10 minute walk of each other. 5, perhaps.

The Museum of the Popular Front, a title no Monty Python fan could get tired of reading, is in the townhouse the organisation used from its inception in 1988. Gorbachev’s policy of openness was immediately used (tested for reality, perhaps) by those who wanted independence. They were committed to peaceful methods, so as not to allow the Soviet Union to crack down militarily. That commitment, and its success, makes for a dry movement, with the museum focused on the progress of policy, peaceful protest and ultimately the institution of a parliament, creation of a currency and so on. There are a mass of TV screens, broadcasting programmes from the era (in Latvian); period TV shells are nicely used, to give a period flavour, or a trip down memory lane.

The text is translated into English, though the presence of multiple languages on some of the display boards make for a mess of text. I got the gist, though, and enjoyed strolling through the building, soaking up the atmosphere engendered by those broadcasts.

Admission is free, and I recommend it, unless the steep steps – four floors to see – are impassable for you.

Baltic Way exhibition – with a gap for you to complete.

Mural and Riga street. Snow on the ground.

A little further into the centre is the Art Museum. Admission 6 euros, which gets you into everywhere – you can pay just for individual parts. It looks like you can just stroll in, ignoring the ticket kiosk, well away from the entrance to the gallery. But an attendant will rise from an unhidden spot, and wait for you to show your ticket, before dematerialising out of your way. It is an enjoyable piece of mini-theatre to enjoy.

I went into three galleries. Downstairs was Dutch Art, in place because the frames are made from Baltic wood. They have run some DNA analysis to check. It’s a lovely idea – the first thing you see, once the attendant has popped up and disappeared, are planks of wood, then the art is all around, with cross-sections of trees in the corners, just to nudge your mind that way. One of the paintings was visible from both sides, to show the mess of wood on its back as well as the art. 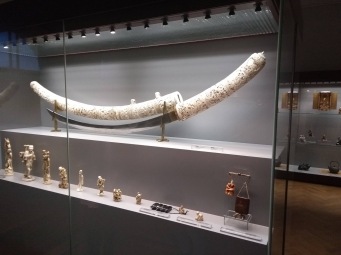 Ivory sword (Japan). For a giant. 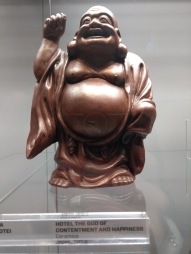 Hotei, the God of Contentment and Happiness.

Up above is the oriental gallery, which has a dazzling array of items from all over the orient, and from many different time periods – as old as 4000BC up until the last century. There’s a small but important room devoted to a Latvian artist who worked in India.

There is also a small but packed section for Ancient Greek pottery and Roman coins. I loved it; some of the pottery was separated into city state of origin (Corinth etc) which is lovely and evocative.

Up on the top floor is the Western art selection, which does a good job of fitting a lot into a relatively small space, though some of the paintings are hung a little high for easy viewing, at least for me. Better they be out and high than not at all, though. We are reminded that what is on display is only ever a percentage by a display of sculptures with photos of (different) sculptures behind, taken to show them wrapped up in storage. 5% of museum’s inventory is on display at any one time, the blurb says. I got some terrible photos of some of the paintings I liked, which you can see below. I was particularly taken by Carl Spitzweg’s study of solitude in ‘The Old Fortress Commandant’, which has a much better version online (follow the link).

Outside the tavern. Plus ca change.

City gates (obviously, I forget where).

It’s a lovely museum, and well worth the money. Plus you can play a separate game – can I get a smile from an attendant? Or just eye contact? Unfair: they monitor quietly, leaving you to browse, and you can’t really ask for much more than that.