Zielona Gora is a largish town in the West of Poland and therefore, if you are travelling across Poland on the way to Germany and then the UK, on the way home. It also begins with a Z, as does its parkrun. Running parkruns beginning with different letters is a ‘thing’. Not a thing I have worked hard at – I had covered a lot of letters by sheer virtue of having toured before many people, and before these things got discussed (though uber-tourist Freyne has always had it in mind, and been way ahead of everyone else). I skipped Zillmere in Brisbane, though it was possible for me to get there, because I might have been a bit late for a friendly gathering at Commonwealth cycling. And there is no X at the mo, and I’m of the view that therefore you can’t ‘do’ the alphabet. But still, you can ‘do’ a “parkrun alphabet” and I have picked up extra letters when the chance has come. Like today!

The day was blessedly warmer than last weekend – a 20 degree swing, in fact, from -12 to 8, making the second layer almost academic. Almost. It was cold in places in the woods. I could probably have run without gloves, though, whereas last weekend, even two pairs had left my hands aching at the finish. I jogged to the start, temporarily confused by the work going on to upgrade the railway station. At one point I was jogging down platform 1, it turned out, which, like the road I started on, offered no way across the tracks. The flags were in place, but no people – no, wait, there is one volunteer there, in the trees. He was it, for the event team, but I had spotted their facebook post asking for volunteers and downloaded the parkrun volunteer app, which allowed me to scan barcodes after I’d finished. I’d never done it before, but it is super easy.

The out and back section, bottom right on the map.

There weren’t many of us there, so a short briefing later – this after the event director had described the course to me in English, though I had recced some of it and knew the outline – and we strolled the few metres to the start. Then everyone faced the wrong way! Oh, a photo. I really am blundering my way through things in Poland, usually only having any idea because of context. So long as the first question in a shop is “do you want a bag?” then I am fine. If they are saying something else, then who knows what I am rejecting.

We started. An energetic dog led the way, coming back to us whenever it thought there was a chance one of us might stop and throw a stick. That was pretty great, then, after the first turn, two deer burst out of the trees on our left, galloped across the path and disappeared, stage right. Another one pulled up short as our gallop got too close, and ran off the other way. I’m sure it worked out for them in the end.

The course is easy to follow, just a few turns and one out and back to get right. The first left turn sign had blown over in the wind before the start, but was replaced in time, and in any case, most people knew what they were doing; two of us were first-timers. A hardy 60-something ran topless, and went through a routine of loosening up before scanning his barcode at the end. Good on him. Another runner took over handing over the tokens, and the event director probably got to relax and enjoy the rest of it, though with only 13 of us, he’d probably have managed okay anyway. It’s not the quickest course. Flat enough, and not muddy, just soft underfoot. Sandy covering on a hard-packed mud base? Something like that, and some tree roots and the like to watch for. Not difficult, just notably slower than tarmac.

Group photo before the start.

Jogging back to the finish (knee strap fell off in the final stretch).

People didn’t hang around afterwards, and my offer to ease round and collect signs was unnecessary or un-understood, so I jogged back through the centre of town, showered, packed and was back into the centre before midday, for a 12:41 train to Poznan. Both last night and this morning I had followed the main road, all new and modern shops. This time, I spotted cobbled streets off to my right and followed them to find what seemed to be the ‘true’ town centre; shops and squares a-plenty. 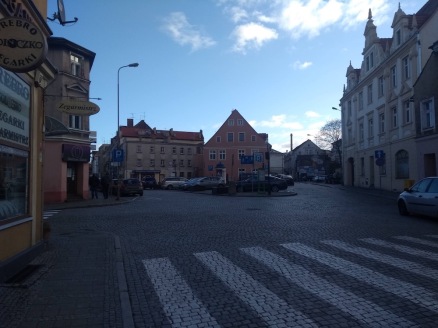 Zielona Gora and a statue.