Montecatini-Terme is a Spa town, albeit one whose spas are mostly closed at this time of year. It is, though, full of hotels, and those hotels are generally pretty close to the park. In my case, it was a case of turning right out of the entrance and from there I could see the Teatro Verdi, at the bottom of the map, above. Yes, that close, so I explored the park the day before.

I didn’t manage to work out the course, not totally, but I got the rough idea. If you know you go clockwise, that helps a lot. On the day, I followed the enthusiastic and friendly (he gave me a hug when we were introduced!) youngster, introduced as “the local champion”, and took, accidentally, literally the instructions that I should follow him for a lap and then run off once I knew where I was going. Sorry, local champion!

The pre-run briefing was minimal, as has often been the case in Italy, but the local Irish-Italian (born there, lives here) had spoken to most of us, in any case. Attendance was swelled by the Taplow Youth Choir, who have been touring in Tuscany for the week. Invited by Burgess Runner Simon, to whom we talked Green Belt Relay, we pitched up at their concert in the Basilica that evening. Those kids could sing.

Many of them could run, too, with the others choosing to walk. I think some were left at the hotel, so this hadn’t been a compulsory piece of fun, but most of them attended, which is brilliant. 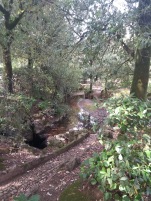 Parco delle Terme. The park is called “the lung of the city”. 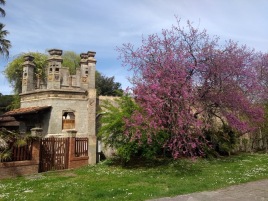 Judas tree in the park. 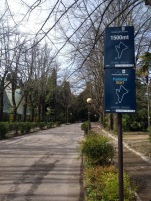 1500mt loop sign in the park. The parkrun route is not quite this. 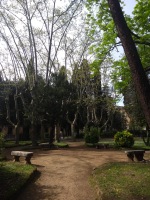 Sitting circle (benches) in the park.

We had a nice front four, me, local champion and a couple of young bass tenors. I managed to leave them behind, proud of myself until realising just how young they were when they sang in lovely shiny outfits, later that evening.

Libby, from my club, 26.2 (Surbiton, England) had come out to join me and run her 4th Italian parkrun, and here we look ecstatic at the finish. The joy turned to minor worry later, as the results were an obvious problem. Crucial keys had been taken to Rome, so the crew had no kit, signs, stopwatches etc., and were just aiming to do their best.

We got results late on Sunday, after an appeal by (I assume) a returning run director for us to send in our times and positions. We got ours in there straight away, but at the mo, only two others have. They’ll either get all of the choir later, or none of them. And then, some years hence, when those young folk get into parkrun, they will say to themselves “Oh, I wish I could get that Terme parkrun added!” So speaks a semi-obsessed park runner, grateful to have added his sixth Italian parkrun to the list, officially.