The Via Francigena is a pilgrimage route to Rome from the North. It can run as far as Canterbury, though it is simple enough to pick it up at other points in France or Italy. Several of the people staying in my accommodation tonight started in Lucca, for instance. The English section is pretty short. In fact, the whole thing doesn’t seem massive. Perhaps it is because I’ve been in Italy over 4 weeks, so feel I have come a long long way in that time (but haven’t, really, with more lateral travel than other), but I was surprised to see a sign saying ‘only’ 1311km to Canterbury. England, France, Italy – that feels close.

The way is under development in places, and is re-routed from time to time. I was  diverted from what looks to be a nice path in San Miniato – perhaps it has been muddy over the winter – and around a field to the South. Neither were dramatic. Entertainingly, the wikipedia page suggests people occasionally re-route towards their restaurant or other business. And I ran up a path, round the back of San Miniato, which had some old paint to mark the route, but is now not a part of it. You’d not go far wrong taking an old path, from my limited experience.

Below, a few pictures of different route markings. The stickers seem the newest, but the old ones still apply. Sometimes.

White and red stripes mark the route in places.

More white and red stripes on a pole.

Via Francigena sticker on a pole.

Pilgrim on a sign with sticker below. Here, a short path to the right avoids a sharp corner on a road.

There are also a few apps with directions etc. I tried Sloways and Via Francigena, and both seemed useful. The route was simple enough to follow – a couple of times the way wasn’t clear at a t-junction, but there was a sign soon after. So if you don’t see one, try the other direction. The apps may be of most use in looking ahead to get an idea of where you’ll be headed the next day.

There are occasional points of medical aid. This one had a book of dedications, held in a saucepan which was held up by pile of rocks and a saucepan as a lid.

Sometimes the views dropping away to the side are beautiful, and are the obvious thing to look at, but there are details to spot along the way, too. 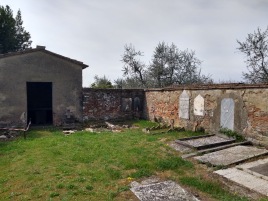 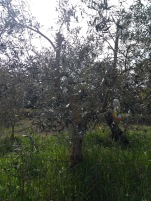 Olive tree with plastic bottle attached. Most, but not all, had a bottle like this. Something to attract pollinators?

Flowers are in bloom en route. 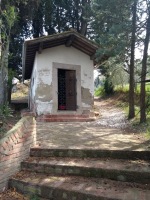 “A marvellous route, quite hard lacking road-houses [which means there are few places to eat, Ed]. From San Miniato, after an hour walk along the asphalt road, enter an extraordinary track among hill crests in Val d’Elsa.”

That hour’s walk translates to just over 5km mostly on the roads (occasional paths along the side avoid the more dangerous stretches) before you turn onto a solid, pebbly underneath, winding trail.

It’s a lovely walk. I might be converted and do some more of these stages. Without religion, but I felt no sense that I didn’t belong.

One thought on “Via Francigena, Tuscany, Italy”