A short jog from where I was staying, not far from the centre of Dresden, yet a km into the run and you are away from civilisation almost entirely. Pieschener Allee is on a section of land left mostly wild, while the surroundings of the start and finish area is used for other sports grounds and car parks, because this is flood plain and so not suitable for heavy development.

A couple of those car parks were in use by camper vans, too, if informally, which would put you very close to the start of the run.

The route itself is a pretty simple out and back. There’s a right turn off the pavement and onto the track (signposted), and then at the end of the track (after about a mile) you turn sharpish left – you can see that in the route above – onto a slower section. Slower because there is a choice of either running on the grass, or picking your footing in two narrow hard-packed, mud, tyre tracks. I aimed for the latter, but the wider flattened grass would probably have been just as good.

The first (and last) mile is shaded, the rest, the slower bit, is open and exposed. Today, that meant it was pretty warm. It’s also the ‘wild’ bit, with fairly high grass to either side of the track. There are a couple of orange-topped poles off to the right – keep them on your right, don’t be distracted if there is anyone running nearer to the river than you, you just stay on the track. Eventually (perhaps, say, flagging in the heat) you make it to the turn-around point, and do the whole thing again, in reverse.

It was a small field of just 17 parkrunners today, but still an international one, and the small numbers meant we all met more or less everyone. The event director was Russian, one of the volunteers American, and my fellow runners included an Irish student – wearing a “Dresden Hurling” top – and an Australian-German who splits his time between the two countries.

Afterwards they head for coffee, a wander back along the path into town, but I had to check out and hop on a bus North, so jogged back along the river, in the shade of Baroque churches and stone walls, over the Augustus bridge and back to Dresden’s Neustadt. 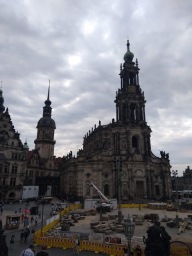 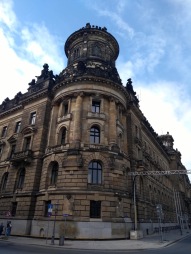 Lovely run, clockwork organisation, and Dresden is a great and inexpensive city to visit.