Utrecht is a lovely city. I got off the bus, which drops you near the central station, and near a plaza surrounded by businesses, a cinema and so on. My first impressions were of space, loads of space, then bikes whizzing around (this a gentle introduction to the need to pay attention in the more crowded middle) and… silence. It can’t have actually been silent, there were people all around, bikes and so on, but it seemed very quiet. An absence of industry, and not much traffic in that area suggests it is a well-planned city. Plus it was Sunday, and the receptionist later suggested people were sleeping off Friday and Saturday nights.

It’s a place of cobbled streets, some wide boulevards with little alleys leading off, canals and parks, flowers and greenery decorating it all. The centre is essentially surrounded by canals, as are many other parts – once or twice, I found myself trapped by canals, but that is rare, and happened because I had explored outside the centre.

Canal lined with eateries and trees. 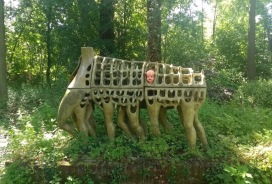 Sculpture in a park. 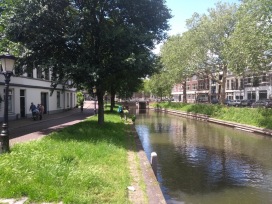 Canal with grass on either side, houses the other side of the roads that run along it.

Wooden bridge over a canal on the outskirts of the centre. 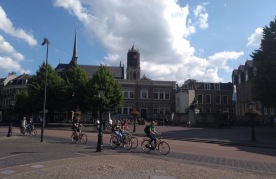 Bicycles flowing along roads. Tall tower of the Dom in the background.