Thanks to the excellent 80 year-old I met in Halifax, the idea of driving the Cabot Trail had replaced that of heading to Prince Edward Island. Admittedly, his recommendation had only been “what can you do round here? Well, there’s the Cabot Trail, I suppose”, which isn’t glowing. But moving, looking and walking seemed a better use of a car than heading to PE and chilling out, which was the activity most recommended for the island.

I booked the cheapest car I could find for a five-day rental, and chose to pick it up from the airport, so I could drop it off straight away before flying out of there on the 6th. It didn’t seem more expensive to go from the airport, and I got cash back from rentalcars.com by going via Topcashback (my referral link). Imagine my surprise, and glee, when the keys I’d been handed unlocked this lovely thing. 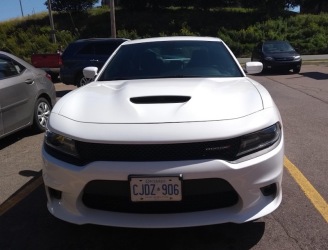 I nearly went back into the office to check, but why waste their time? It took me some time to pull out. A family was unloading opposite, and I wanted the space – this is not a tiny car. And I was paging through the options, connecting devices, seeing tyre pressure shown on the screen and finding that although I had turned down a sat-nav, this car was happily connected to maps and all sorts. I would be reminded of this often, as at 7kmph over the speed limit, the Dodge intervened to remind me what that limit was. There was even wifi, had I wanted to pay the extra.

Still, the point was to tour the scenery in this thing. I wasn’t going too far on the first day, just up to Bear on the Lake HI hostel, south of Bucklaw and a little South of the Cabot Trail itself; a little under 300km, through Canadian versions of Enfield, Truro and Port Hastings. 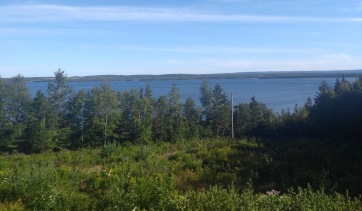 View from the hostel. 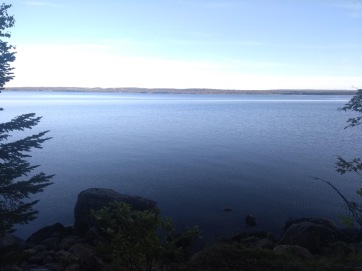 View of the lake, up close.

Path to the lake (once across the busy main road).

I saw some scenery. I arrived at the hostel, closely followed by a Brit who had been persuaded to upgrade her rental because the Cabot Trail is a bit hilly for a small car. I felt lucky.

We enjoyed the last of the sunshine as the Autumn evening cool descended. And I wanted very badly to get back into the car.