The Cabot Trail, taking you round the edge of Cape Breton Island, is a well-travelled tourist trail, with plenty of variety in the activities available. None of that really mattered to me, because I just wanted to drive the car I’d hired, a Dodge Charger. But I managed to let my exploratory instincts take over, with just a short trip North to Baddeck, and the Alexander Graham Bell National Historic Site (or museum, if you want to save words).

I spent a happy hour or so in the museum, with its exhibits from his time teaching, breeding sheep, inventing and helping, even revolutionising, deaf education. 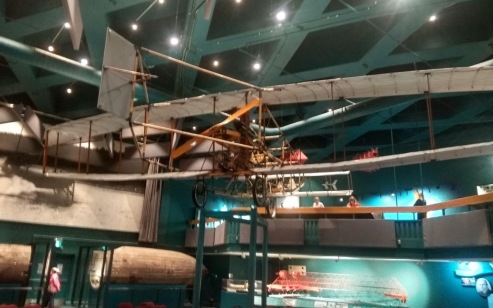 The back of the museum has larger exhibits, including this place and others devoted to his hydrofoil experiments. 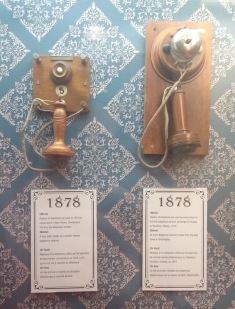 I liked the story of his sheep breeding experiments. Failure is a necessary part of science, but this story still made me smile. It stands on its own. From a caption in the museum:

“Bell’s desire to help the local economy prompted him to experiment with sheep breeding. He attempted to develop a flock of sheep that would consistently bear twins. He believed that a relationship existed between the number of nipples on a sheep and the likelihood of multiple births. Over 30 years of research led Bell to conclude that no such relationship existed.

Bell was successful, however, in breeding a flock of multi-nippled sheep.”

As well as holding the exhibits, which paint a great picture of his interests, his life and that of his wider family, the museum has outside areas with great views over the Bras d’Or Lakes.

The museum is great. I was itching to drive the car, though, and also to take a picture or two of it.

Lay by photo. Yes, I was still looking at the car and going mmmm, hence the picture including the bonnet.

It was a beautiful, warm day; puffy white clouds scudding across a blue sky. And the landscape as you head round the Cabot Trail. Either way affords great views, but I went anti-clockwise; in a drive-on-the-right country, that puts the ocean right next to you in places.

I headed North, stopping every time the scenery threatened to overwhelm my senses and make me a dangerous driver. I stopped often.

Ingonish beach. I do not know what the deflated ball on a stick was for, but I liked it.

Stoney underfoot leading to the beach. 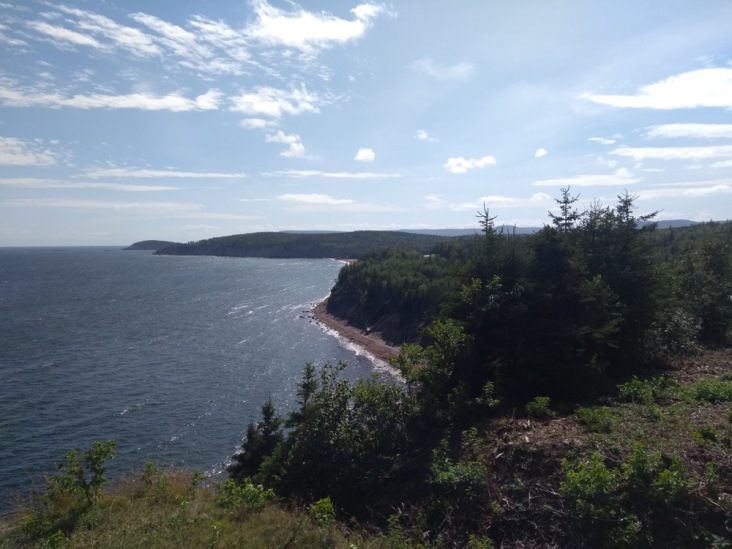 Pine trees by the shore.

There is no shortage of sights, or places to stop, and I was happy to let serendipity guide me for most of the day, turning up coastal views, trees, water, rocks and a general feeling of peace. The map makes it quite obvious that the Cabot Trail just takes you round the edge of the peninsula, with most of it inaccessible – left wild to allow wildlife to flourish. It is possible, in places, to feel like you are being funnelled round the bit that’s open to visitors, rather than exploring it. But it is astonishingly beautiful. 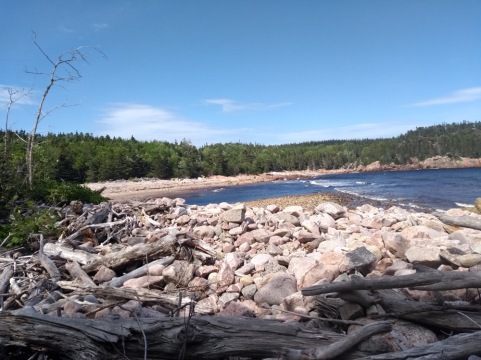 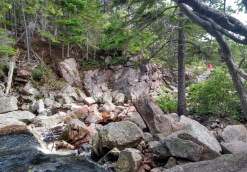 A pink chair at the top of a walking path. 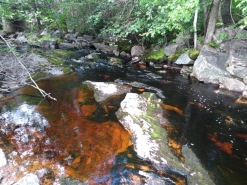 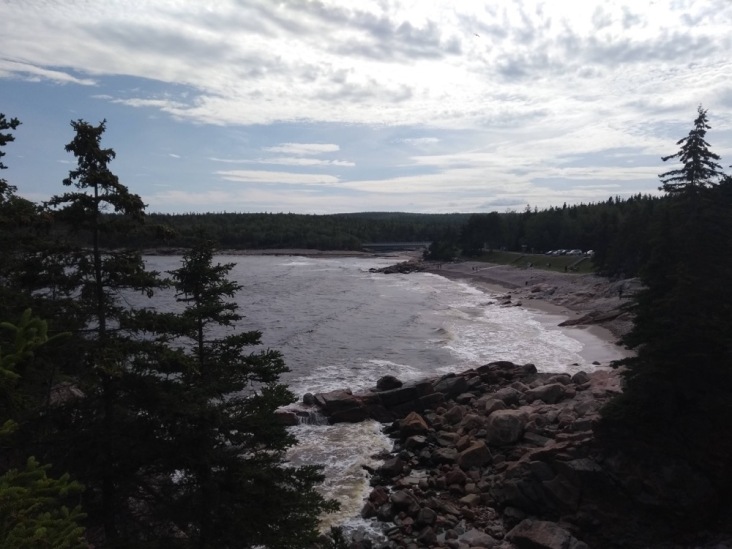 Alongside the serendipity of just driving up and finding whatever was there, I had been told to turn off the main road in the Northeast, and head to Neils Harbour and White Point.

I stopped first at a short walk, the Jack Pine Trail.

A cliff-top look over the bay. 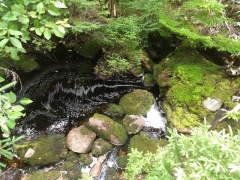 Moss and greenery around the water.

Red berries on a cracked tree.

Finally for this day, other than the pleasure of driving across the top of the island to HI Cabot Trail, I parked at White Point. I couldn’t work out (or remember) why this spot had been recommended to me, even though the conversation had only been a couple of days before. A small port, some farm buildings. Water.

But take a walk up the only path available, marked as the trail head, and an incline up a rocky, hard-packed mud path is a nice little workout.

Then, as you crest, the view opens up.

Grave of the Unknown Sailor.

Grass and rocks, cross in the distance. View starting to show itself. 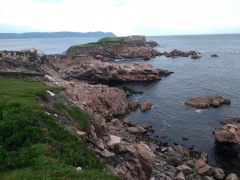 The rocky track at White Point.

I found time for one last walk, through forest, over a small bridge and to a waterfall. But White Point was the highlight of the day (if you’re thinking “but aren’t you going to bang on about the car one more time?” then yes, you are right, that too, and I would but you’ve stopped me, alright?).