Dungloe parkrun is on the outskirts of the town, at the River Walk. Parking is free, over the road at Lidl, there are no toilets and the surface is good. The paths are gravel rather than tarmac, so watch your footing a little bit, but it’s not prone to ice, water or tree roots. It’s not completely flat, but there are no serious inclines.

The markings needed for the course are minimal, and the start and finish posts are permanent, along with a sign advertising the event at the entrance to the walk. It can run with minimal volunteers, so long as everyone knows to turn right at the final turn twice, then left on the third lap, over the bridge to the finish. It’s very simple, though there is a tempting path just before that turn, taking you through a stream. That also leads to the finish, and one or two have taken that route.

With two loughs off to the side, and a big clump of trees in the middle of the loop, it is very scenic, particularly on a clear, bright day. It was cold, but the views compensated.

A sign on the main road entrance advertises the event.

Start line. The first (right) turn is at the post to the left. 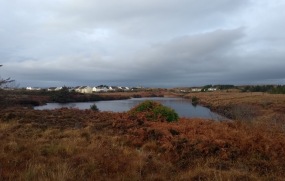 View from the course.

View of the second lough. Taken on a different, cloudier, day.

This was my actually second attempt at the run. Last week’s ended dramatically for us all, but ultimately with a happy outcome. As I came round on my second lap I saw a group of people up ahead. Only when I got near did I realise a runner was performing compressions on another, who was flat-out. I’ll spare you the details, but we all gathered and hung around together, doing whatever we could, as paramedics arrived. The course can just about fit an ambulance, so he was taken away, and we all re-grouped – to no great effect, but not wanting to just walk home – in the local supermarket car park as they brought in a coastguard helicopter to airlift him out. Happily, he was discharged from hospital in the week, and is now recovering, and promising to come and walk the course as part of that.

There was no such drama this week, and we were all glad to layer a happy memory on top of a traumatic one. The run director said that in the week she was done with the whole thing, but wouldn’t have missed today, nor future events, for anything. It’s a small event – 22 finishers today – but one with a warm welcome and a lovely community feel.

The Run Director did a great job of talking to everyone and also including us all in various combinations for photos at the end: 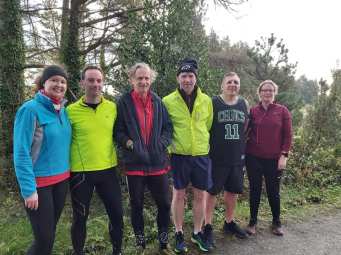 A group of runners.