In the UK, a weary staffer reset the “since party outrage” counter back to 0. It was originally expressing days, but switching from 1 to 0 repeatedly wasn’t very interesting, so they had moved it to hours some time ago. The staffer wasn’t weary of the job – by now, if you work for a party that is no longer Conservative, nor Unionist, and haven’t embraced lies and outrage as your currency, you are strange indeed. But boy, it was a lot of work. I was in Ireland, a still-sane country.

In the UK, legitimate and verified news stories of NHS struggles were crushed beneath a slew of unreliable claims that they were false – all expressed in exactly the same words, and calling the LGI “Leeds Hospital”, which no one does (but there is no problem with foreign intervention). A false, quick-spreading story that a staffer for the lying party was punched at that same hospital was only overturned because the reality was filmed – something we will from now have to do routinely. As all of that happened, in just a few hours on one day of an exhausting and depressing election campaign, I was touring Donegal. It is a beautiful, sometimes windswept and wild county, including the Northernmost point of Ireland.

Glenveagh National Park covers a large area, so you can walk for hours and hours. I parked at the visitors centre, which is free, and walked to the castle. If you want to visit the castle (a house, built in the 19th century, rather than an old stronghold), you’d be better advised to pay for the shuttle bus to save your legs, but it’s a nice walk.

Almost all of the walk is beside the lough.

I headed South to Narin Beach, which has a parkrun every Saturday at 9.30. It is a wide expanse of sand. I was lucky enough to be there on a sunny day – “like summer,” said a local, and round here that isn’t too far from the truth. 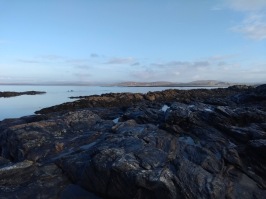 Rocks at the far end of the beach.

I also headed to Sliabh Liag (Slieve League) mountain, which has an easy approach walk (and at this time of year, you can open the gate in the car park and drive up to the top, to save a couple of kms). The views over the cliffs are spectacular.

Sheep in the fields on the way.

Steeper walk to the secondary viewpoint.

View of the cliffs.

There is a path heading up over the cliffs. With cloud hanging over the top, I wouldn’t have done it anyway, but seeing that its title is “One Man’s Pass”, made sure I just didn’t fancy it.

On the walk back the views are just as spectacular. This isn’t the only place where they have arranged stones to spell out “EIRE” for air traffic.

EIRE spelt out in rocks – you can see most of it, in the middle.

Sign showing walks. One Man’s pass looks sketchy to me.

Small island out to sea. 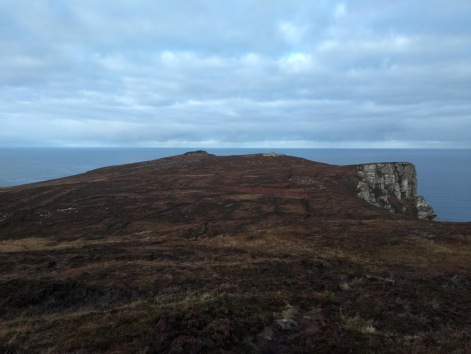 A peninsula sticks out.

Although it is a small place, and reviews suggest there’s not much to see without a tour (summer months only), I headed to Doe Castle, and sat in the grounds to eat lunch, overseen by a curious sheep.

Donegal is a stunning landscape, more or less wherever you go. The Atlantic crashes against its shores, there are beautiful, quiet beaches everywhere and the landscape is dramatic. Not much by way of flowers, either in the wild or in gardens, but the views are fabulous.

House on the coast.