Booked to stay in Cornwall for two Saturdays, I had a choice of many lovely and tempting parkruns. They’d all be tempting anyway, by virtue of being so far from my usual locations, but there are plenty of National Trust, scenic, riverside or other factors. In the end, I chose the new one at Land’s End; scenic, new and at the very Southwestern extreme of England.

There’s masses of parking; the event page says it’s free to parkrunners, so I ignored the pay and display sign and put a barcode on my dashboard just in case. It seemed that on this quiet January day, with the attractions all closed for maintenance, no one was checking. There are kiosks at the entry, so perhaps in busier times you will flash a barcode at them. At any rate, I don’t know exactly how it works, but it worked just fine.

There are toilets in the main building – the doors in the passageway behind the columns, above. That passageway is also the way to the meeting point, just behind and to the right.

Start of the three laps. 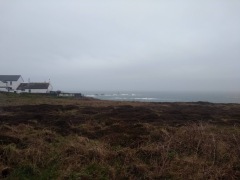 View of the ocean.

Scenic views. Seen on a walk after the run, as this was to the side of the most blustery section, and during it I was focusing forwards.

The run director has a megaphone, which may not be needed for the numbers on a January day, but is for the windy surroundings. This was as windy a day as they’ve had here, though there will be windier ones. The short laps go fairly close to the edge and though there is a wide path there, very windy days will probably lead to cancellation. Today was fine, though people (okay, me) on their first short lap tended to stick close to the left hand side, lest a sudden gust lift them into the air. On the second and third, knowing it wouldn’t, we used most of the path. With a little left over for safety. 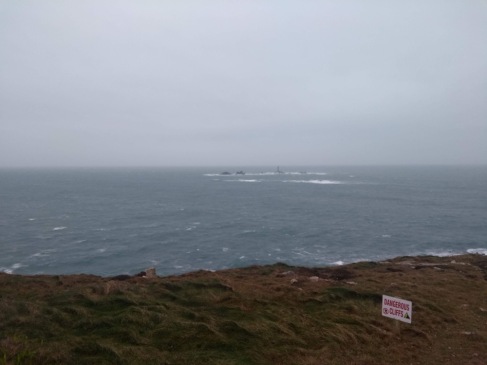 Looking out South. This path is not on the run, which goes up the middle path, and the cliffs are several steps away.

I was taking pictures when a nice gent insisted he take a picture of me. I think he wanted a distraction from his children. 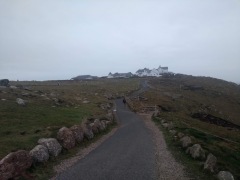 View of Land’s End complex. The event uses the path off to the left, but this point shows roughly the length of the short laps.

The route is very straightforward to follow, with marshals massing near the start/finish, to make sure you take the right turns. The start goes down the exit road, which is closed for a few minutes for that purpose, then takes a left onto a path with several sharp turns – there’s plenty of space, just stick to the left for the sake of people coming back the other way. Keep going till you meet the turnaround marshal, run around their cone and back. At the end you don’t go onto the exit road, but use the narrower stony path beside it, heading onto the three short laps. All you have to remember, as the run director told us, is that you pass the ‘first and last’ house three times, then finish. Easy.

There’s a very nice cafe on site; they’ll happily sell you a beer, too, if you want to celebrate more than usual.

View over Land’s End; first and last house in the distance.

The flag needed some support.

I loved the event. It isn’t totally unpopulated, and at least one person walked from their nearby house to volunteer, but most people will travel from the near area and there’s an air of excitement at being here to run or walk. As always, highly recommended and plenty of fun.

One thought on “Land’s End parkrun”