Karpendonkse Plas is a lake in the NE of Eindhoven, next to the Technische Universiteit. If coming from town, you could walk through the campus, or there’s a path to the North of it that follows the river. There is plenty of parking right next to the start.

I stayed in Helmond, where there’s a cheap and quirky backpackers, which meant a quick hop on the train (buy your tickets online to save a euro off the price, making it €3.40 each way). I caught the 7:45, but as the journey is only 10 minutes or so, and the lake a couple of kms away, a later one would have done just fine.

There is a fabulous sports complex near the route, but it isn’t open before the event. I didn’t know that, but had used the toilets at the station in any case (€0.70). It is open afterwards, allowing you to wander past the athletes of Eindhoven Atletiek, running and jumping, if you head for a drink. The running club there – 1,500 members strong, and the original club of Sifan Hussan, among others – is supportive of the event, with members in the core volunteer team, but they haven’t yet flooded it with numbers. I am sure some will build it into their routine; a group were running round the playground to warm up, then using the lake, and they’d be ideal. That said, the parkrun is already getting good numbers, after local publicity including a TV spot, with 160 at the first and 78 today.

The course is almost completely flat, with changing but always good surfaces. If it’s not tarmac, it’s hard-packed mud with shingle, or brick pavement. One of the team said they were asked about a winter course, but this place has never flooded yet, so they are confident that they’ll just, as the running club has, keep running round the lake. There were a few puddles on the path, which the same person had never seen before, but they weren’t big enough to be any serious impediment. I barely even got my shoes wet. 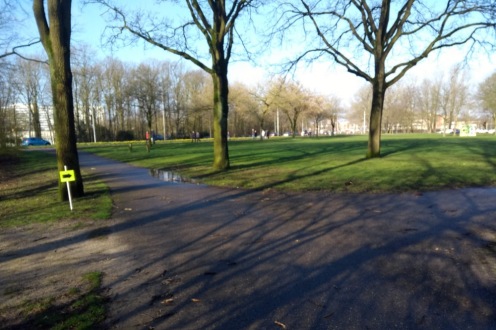 Turn right at the first opportunity after the start.

Having turned right, head past the playground. 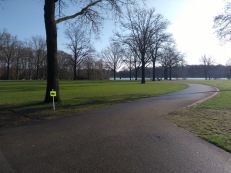 After running round the back of the playground, a right turn takes you back to the lake.

Plenty of right turns round the field.

The first two laps of the field took me to about 1.2km, so each lap of the lake is about 1.9km. We had glorious sunshine on a cold day, which makes a difference to the photos. Fewer tourists than last week, 24 first-timers and a group of ‘unknowns’ who wanted the run, but not to scan, so there’s plenty of local interest.

Crowd at the finish. 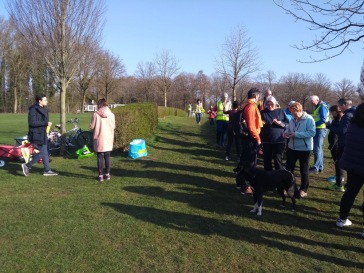 Crowd at the finish, showing a different view of the natural funnel.

I shared stories with the group – mostly volunteers – in the sports hall afterwards. You never know who you’ll end up talking to; the lady who initially spoke to me in fluent Dutch turned out to be a former double Eindhoven marathon-winner, Heather MacDuff. After thinking marathons sounded daft when London started, she discovered she was pretty good at running – going from a decent 2:55 winning time in 1986, to 2:34 in 1988 – but had no luck with selection for most major competitions, always running much better times when it wasn’t so necessary. Still, her times made mine seem very modest, but she was magnificently modest about it, and just as interested in talking about parkrun.

I didn’t talk to the other volunteers as much, but it’s clear they are all interested in running, while being very keen to support the walkers. A large group accompanied the tail-walker (Sluitloper), having a merry time, and the first person I talked to asked “Are you here to walk?” as his way of asking if I was aiming to participate, which was a great way to phrase it.