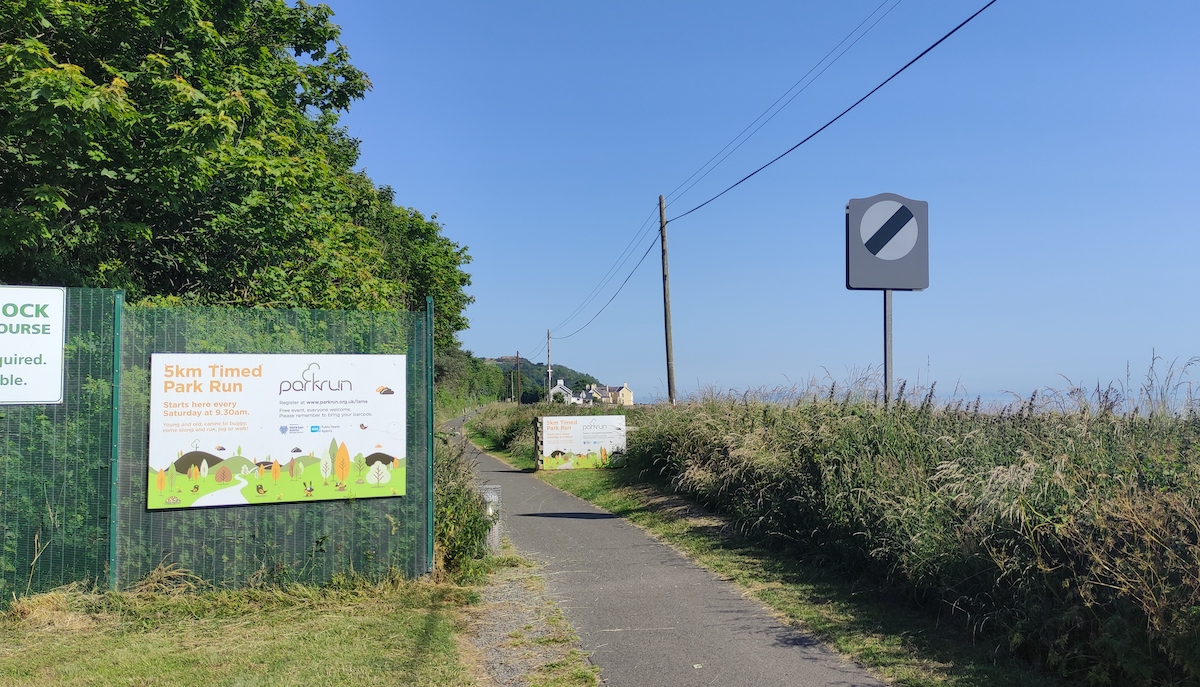 On the day Northern Ireland set a record for its highest recorded temperature, a run by the sea turned out to be a great idea. With a breeze and glorious views (which I noticed mostly while walking round after the event), this was a gorgeous run as the day warmed up around us.

I hopped off the midnight ferry from Cairnryan at 2am, drove to the car park and then waited. At this time of year I only had a couple of hours of darkness, and those with the sky changing colour, to sleep before daylight came, so sleep was fitful. Dawn, though, was gorgeous, with the sea shushing against rocks as an atmospheric backdrop.

Facilities. Drains Bay car park is ample for the current size, leaving space for other activities such as the charity walk that set off this morning. There’s also parking for a food truck and a gelato truck that I only just resisted. The toilets there should be open from 9, but were opened before 8 this morning. There’s another car park on the water side just opposite the park’s gate, which is about 600m (the length of the out and back section) from the start and finish.

I was disappointed to see the whole distance only equated to 40m of elevation climbed, as it felt like it was rarely flat. The first out section is, but after that there’s fairly constant gentle ups and downs, with one long downhill section to complete the lap of the park. A pretty tough course, I thought, though I did complete each mile more quickly than the last, so I guess it’s not so lumpy as to completely knock the stuffing out.

There’s plenty to see, most of which I missed in the general blur of trying to get round, even though it’s two laps round the country park. A trampolining area, campsite, cafe, fitness equipment and a mini railway. None were in use as I went round, though the park was getting busier after 10:30 as I walked round later.

The course was well marshalled and signed, with a few large signs put in place where there aren’t marshals. On the course map, above, you can see a small loop at the bottom left. At that junction you just turn right each time, so runners don’t cross each other to make the loop. All that said, there are also permanent arrows on poles, as shown in the picture below. There are probably other kilometre markers, too, though I only spotted the 1k – and that on my walk, not while running.

A few pictures of hills. Or gentle inclines to attack, perhaps, if you’re fitter than I am.

A few more tight turns on the route. On the first, you cross the road, keep the railings on your left and sharp right at the bottom. In the middle, pass the bench on your left, then right and left to not hit the fence. And finally, a cruel uphill with railings on the side, where normally you’d cut across the grass, but here follow the path round an S-bend.

There are other sections of the park, which aren’t covered by the run, and if you’ve time I recommend a walk to the far end (compared to the run start) to see the maze, flower garden and time garden – it must have been a long time since I’ve used a sundial as I was amazed at how accurate they were.

Larne – seaside location, scenic, coolish on a warm day and a testing place for a parkrun gallop!