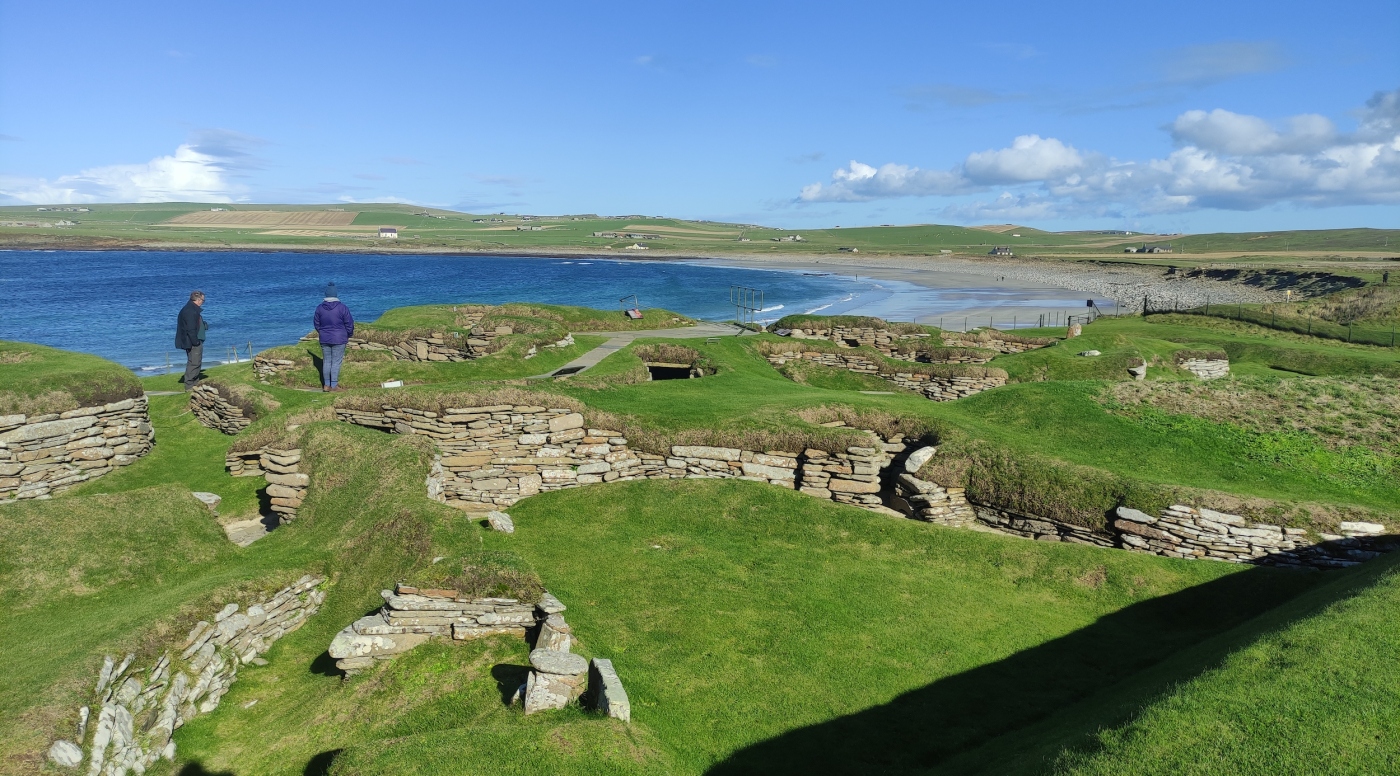 After a weekend of windy weather, Monday was sunny and relatively still. The ideal day for a walk through the island.

Orkneys buses cover much of the island, but for places that aren’t ferry ports, are only intermittent. It’s possible to get a bus to Skara Brae, but direct ones from Stromness go rarely enough that it seemed easier to walk – it’s 7 or 8 miles, depending where in Stromness you start from. I booked my ticket ahead of time to make sure the fairly tight capacity limits weren’t reached by the time I got there, though on an October Monday that wasn’t really an issue. It’s £9 for adults, or £4.50 if, like me, you are in the first year of an English Heritage membership (if you’re a renewed member, it’s free).

Orkney has plenty of Neolithic sites, and Skara Brae may be the highlight; a settlement of ten houses. It was discovered by chance in 1850, when a severe storm took the earth from a large knoll, to show the outline of the village. It was partly excavated, then abandoned before it was returned to in order to protect it from the sea and people raiding for artefacts. Now, there’s a museum, the site itself (and a display room next to it, currently closed) and Skaill House.

The museum is in the visitor centre, and just has a few rooms to introduce the site. The artefacts found, at least those of whalebone, are in incredible condition, given the settlement was occupied between approx 3200 and 2200BC.

Just outside the centre is a re-creation of the best-preserved house, to give an idea of how each would have looked when intact. They were all built to the same template, so if you’ve seen this one, you’ve seen them all.

From there it’s a short walk to the site. Beside it are dated blocks to give you an idea of just how far back in time you are going – beyond the Romans, past the construction of the pyramids, to this collection of houses.

It’s a place to wonder at, rather than spend ages. It isn’t a large site, but on a good day it’s astonishing enough to just stand and stare, imagining a bustling community living here.

From the site itself, another short walk takes you to Skaill House, for a chance to see how rich people lived not very long ago.

The house has been there, gradually expanded, since 1620. It strikes a slightly discordant note with the ancient marvel that is the settlement, but it’s presented nicely and, I suppose, does the job of returning you to more recent times. There is some personal history of the owners, which I found mostly uninteresting – great for them, of course, but not for me – other than that of the last person to live there full-time, who retreated to mostly live in one room as the house grew mouldy around her. She died in 1991 and left it to Malcolm Macrae, who had it restored so as to be on display, host weddings and hold a couple of rental flats for holiday-makers.

I was lucky enough to be just behind a charming double-act, who entered each room with “nice room”, and then gave the call-back “lovely room!” As we finished and headed for the gift shop, he agreed that yes, he would like ice-cream. “Vanilla?” “Yes, of course”. Quite. I had the chocolate, which was excellent.

Visible from the site, and a short walk down the road (or through a metal gate on the left of the site – I snuck back in this way, ticket to hand in case I was challenged) is a great beach. On a sunny day like today, it is a great place for lunch, and not itself a long walk even if you walk the whole length.

The way back was harder than the way there – purely because I got more tired, and walking along the side of the road needed a little bit of attention, which was ebbing. I also chose not to take the slightly shorter route, down Hillside Road, as it was slippery and uphill on the way there, and I didn’t fancy sliding down it on the way back. That left me on the main road: the roads aren’t busy, the walk is fine, but after a couple of hours of checking behind me every time a car came towards me, in case a car coming the other way meant I needed to move off the road, I was tired. If you can get the bus one way, I would recommend it.

The only rain of the day came in horizontally for a brief period, being replaced by more sunshine and a rainbow, which topped off a glorious day.