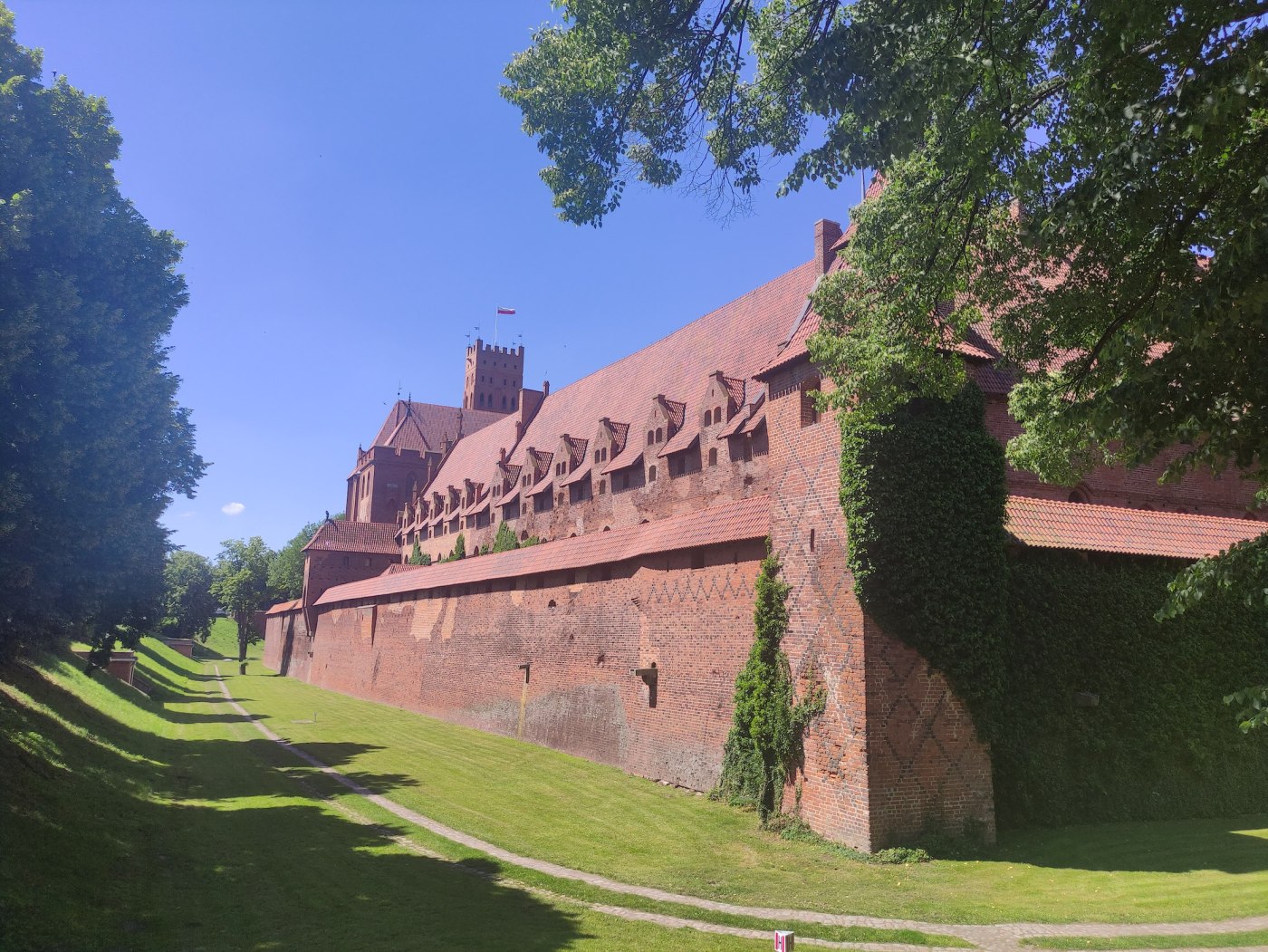 Malbork, a town in Northern Poland an hour or so from Gdansk, lays a claim to having the largest castle in the world by land area. Different people or guides phrase this differently – some mention the fact that it’s the largest brick complex in Europe, probably because that the brick such a distinctive feature. Overall, it may not mean much more than that the walls have been extended to cover a larger area than others chose to. It’s also all a reconstruction, as so often is the case in Poland, and there’s an exhibition on the restoration from 1962, following a fire in 1959 which had added to the damage done in WWII.

The size of the site means this is a lengthy visit if you see it all, particularly if you listen to all of the excellent audio tour that is included in the main admission price.

The castle is from the 13th century and was the headquarters of the Teutonic Knights. It’s suitably grand. The tour takes you through the three castles, High, Middle and Lower – I realised on the tour that although these terms are self-explanatory, it had never occurred to me that a “High Castle” was a term in actual use, rather than just a description.

The guided tour is excellent. It’s location-specific, so you can ignore any particular section by just wandering off, though I was happy to listen and head to where I was told. You can still explore more or less as you want, and some parts are slightly fiddlier to find – exit into the corridor and you’ll see a gargoyle on the wall, he said, but it was a small gargoyle and I looked the wrong way the first time – which added to the sense of exploration.

Along with the grand architecture there’s plenty of paraphernalia to see. Amber is big in the region and the castle has a large collection. There’s an amber museum in Gdansk if you’ve not had enough, too, though one was enough for me.

The castle was built for strength and so was never besieged. After 1457 it became one of the residences for Polish royalty until 1772. Swedish forces invaded and occupied the castle during the 30 years war, in 1626 and 1629, but it has not been the scene of much fighting. The tour therefore concentrates on interesting architectural features rather than historical political to-ing and fro-ing, and is all the better for it.

I enjoyed the tour and was a little sad when it ended and I had no more words from the soothing narrator. As a result, when he suggested downloading a further app and joining him in a tour of Malbork’s medieval city, I did just that (though I saved it for the next day – it really was an exhaustive tour of the castle). The Movi guide has guided tours for plenty of areas in Poland, along with the Kaasmuseum in The Netherlands and The Witold Gombrowicz museum in France. Well worth a look for Poland.

Information about Malbork Castle from Wikipedia.